Trending
You are at:Home»Health and Safety»Report your tick bites, check yourself 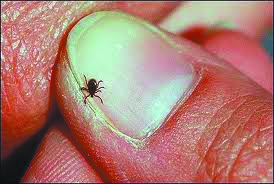 If you are bitten by a tick on the job, make sure you report it to your supervisor as you would any other injury.

If the bite makes you sick and your work status changes, you will have proof that it occurred on the job and the appropriate documentation if you need to take Workers’ Compensation.

Follow up with your doctor, even if you are not exhibiting symptoms of illness, and if possible, remove and save the tick for testing. If the tick tests positive for Lyme disease, you can begin treatment much sooner and perhaps limit your illness.

Check yourself and your clothing when your shift is done or soon after. Ticks are notorious hitchhikers, and while you may not get bitten, you may be bringing an infected tick into your home where it could bite other family members or pets.

Lyme disease is a bacterial infection caused by the bite of an infected deer tick.

Common symptoms of Lyme disease include a rash often called a “bullseye” because of the way it presents with red or purple rings, fever, body aches, flu-like symptoms, fatigue, headaches and arthritis-like joint pain.

Ticks can also transmit other disease such as Rocky Mountain spotted fever, so it’s important to be alert for any symptoms that follow a tick bite.

Eastern and southern regions in New York are at the highest risk, though the disease is prevalent throughout the state. Contracting Lyme disease from a tick bite depends on the type of tick, where you are located, and how long it was attached to you.