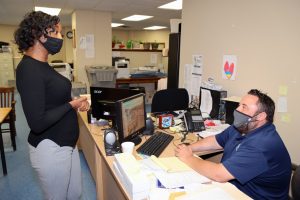 MINEOLA — CSEA Nassau County Local activists successfully fought back against the county’s brazen subcontracting violations, securing a $375,000 judgement from an arbitrator on behalf of members working at the Nassau County Sewage Plant.

“The county has a manager from private industry running the sewage plant and that manager was hiring workers from his employer, rather than delegating responsibilities to CSEA sewage plant workers,” said CSEA Nassau County Department of Public Works Unit President Jack Cloudman. “That blatant violation of our contract is what led us to file a grievance.”

CSEA won a grievance in 2016 related to the sewer plant subcontracting. In that decision, the county was ordered to stop giving work to outside companies, and hiring protocols for the sewage plant were explained in detail.

Instead of abiding by the decision, the county ignored it, which led the union to refile the grievance.
This time, local officers sought a monetary award, to make the county understand that the union had no intention of accepting any further disregard for grievance decisions.

As part of the research into this issue, the Nassau County Local did a cost analysis and determined that the county spends millions of dollars on subcontracting fees every year, when in-house county staff can do high-quality work at a lower cost.

CSEA staff was there to lend their expertise to local officers, every step of the way.
“It was a long project, and it took a coordinated effort between CSEA’s Legal Department, the LRS [Labor Relations Specialist] and the local to see this through,” said Cloudman. “We had to pull a lot of information to get this done and as a team, we worked together well for the benefit of the membership.”

On average, CSEA members at the sewage plant received $8,000 in back pay for the work that was wrongfully given to private industry workers.

The big takeaway from this victory is the importance of member participation in their own fight.

“This subcontracting win could not have happened without the membership,” said Cloudman. “Their written records and testimonies are what put us on top.”