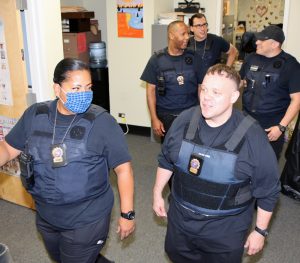 MINEOLA — In 2020, the U.S. News and World Report named Nassau County, Long Island the safest community in the United States.

Much of that can be attributed to the county’s commitment to funding public safety professionals, including CSEA Nassau County Probation officers. A group of probation officers has been conducting very successful gun seizure searches. Since 2018, the officers have taken 39 guns off of the streets.

The six-person team goes out as a group and searches the homes and vehicles of probationers to ensure that person is not in possession of anything illegal. The officers mostly work on cases specific to gangs and other types of violence affiliated with guns.

Once the guns are seized, the probation officers contact their counterparts in the county Police Department, who make any necessary arrests.

The probation team usually focuses on people who have given an indication that a search is in order.

“If the [probationer]isn’t showing up for probation meetings or their drug treatment program, then we know that we should conduct a visit,” said Nassau County Probation Officer Matthew Rechner. “We might also realize that we haven’t been to someone’s house in a few months due to the pandemic, so a visit is needed.”

The officers also discuss cases before they conduct the search. Details include whether probationers are dealing with drug addiction, have had recent arrests and what kinds of guns they have possessed in the past. These conversations give the probation officers a better picture of the circumstances they may face during the search.

Many times, the team will get a tip from the probationer’s neighbor, significant other or family member that a visit should be conducted.

Once the team goes out into the field for the visit, the probation officer who is heading up the case will establish initial contact with the probationer. Once the probationer is patted down to secure safety, the entire team then goes into the home and conducts the search. Vehicles are also part of the search.

Years of conducting home visits has taught the probation officers signs to look for.

“[Probationers’] body language can tell you a lot,” said Nassau County Probation Officer Isabel Arroyo. “They may start sweating or fidgeting. Those are red flags.”

“You may go into the closet and there’s dust everywhere,” said Nassau County Probation Assistant Deputy Director Anthony Johnson. “That usually means that no one has been in there for a long time, which means you should look, but there’s probably nothing in there. You always have to look anywhere close to the bed because the [probationers]usually want their illegal items close by.”

During one particularly noteworthy search, the Nassau County Probation Team found a probationer sleeping in his bed while a gun was resting on the nightstand.

“Izzy [Isabel Arroyo] saw the guy sleeping in the room and motioned for me to come over,” said Rechner. “We knew we couldn’t wake him up because the first thing he would do is grab his gun. Izzy and I quietly walked into the room and I grabbed the guy, threw him down onto the floor and handcuffed him.”

The probation team continued the home search and found a second gun in a nightstand drawer.

Once the search is over, the team debriefs back at the office.

Probation team members note they has never had any serious incidents of aggression with a probationer. This can be attributed to the respect the team has for the humanity of the people whose homes they search. 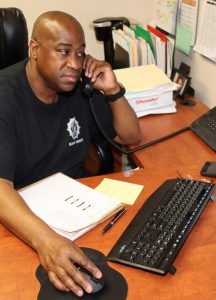 “We build a rapport and mutual respect with probationers,” said Johnson. “We would ruin that if we were to disrespect them, or their home, by going in and trashing the place. Problems with aggression arise when the [probationers]feel disrespected. To probationers, probation is a game and when they get caught, they respect it. For gang [members], respect is everything.”

“Police tell us that we take more guns off of the streets than some precincts,” said Johnson. “It feels good to know that we’re making Nassau County streets safer.”