Trending
You are at:Home»Pretrial Probation and Parole»Protecting our communities: Collaboration targets intimate partner violence in Ulster

These services include helping probationers rehabilitate and keeping citizens safe from violence.

They are often filling these roles amid challenging working conditions, including dealing with chronic understaffing and risk of violence. The COVID-19 pandemic not only amplified these challenges, but workers had to quickly adjust to new ways of getting the job done.

However, these workers are also giving back to their communities, including through helping pack and distribute thousands of bags of food for families in need; coordinating crowd control and data entry at vaccination sites and helping community members safely reunite with their loved ones at public nursing homes.

Through it all, they go above and beyond every day to not only help their communities, but those who are directly served by their agencies.

As we mark Pretrial, Probation and Parole Supervision Week from July 18-24, CSEA honors not only these workers, but all CSEA members who work to keep their communities safe.

KINGSTON — For many people experiencing intimate partner violence, the pandemic made an already dangerous situation even worse.

With instances of illness, quarantines and loss of income from job loss, it was the toughest time in recent history for victims looking to leave their abusers.

Thankfully for several Ulster County communities, an initiative between several public agencies and non-profits provides a targeted response that helps victims get the support they need and gives offenders a chance at rehabilitation.

The county’s Intimate Partner Violence Intervention Task Force (IPVI), created in 2017, has CSEA members from the county Probation Department teaming up with police from several communities, the District Attorney’s Office, and local non-profit agencies that provide counseling and other services. 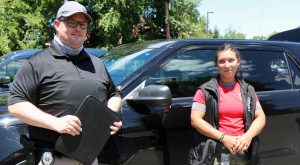 “We’re trying to help people make that positive change,” said CSEA member Brian Brady, one of two probation officers assigned to IPVI. “They’re identifying cases earlier, there are more services than in the past and there’s more of a targeted approach for supervision.”

David Kennedy, a criminologist working for the National Network for Safe Communities (NNSC) based at John Jay College of Criminal Justice in New York City, spearheaded the national IPVI program after a previous success with an initiative targeting gang violence.

NNSC identified the City of Kingston in Ulster County as the first location in New York to pilot IPVI due to the city already having more measures in place dealing with intimate partner violence than the average municipality. Since the program’s initial success in Kingston, the task force has expanded to include the Towns of New Paltz and Saugerties. There are hopes to eventually expand the program countywide.

“I think it’s a great approach to help the client or defendant get resources and be held accountable at the same time,” said CSEA member Jessica Ercoli, also a probation officer.

Police identify intimate partner violence cases that are then referred to the IPVI team. Once the offenders and victims have been added to the caseload, officials from different agencies reach out to offer different services and resources. Should another incident occur, first responders are better prepared.

“With collaboration between agencies, the officer on scene has the history,” said Brady. “They don’t have to require the complainant to relive everything and explain from day one, when the reality just opens up a lot of memories they don’t need to go through again.”

In addition to Brady and Ercoli representing their department as probation officers, they also refer victims to colleagues in their department working as part of the Crime Victims Assistance Program, who offer confidential support.

Holding regular meetings allows representatives of the different agencies in IPVI to collaborate and bring each other up to speed on cases.

“We still all have our own duties and our own positions, but it’s nice to get feedback from people and deal with clients collaboratively,” said Ercoli.

Rehabilitation is the goal. Job resources and training are offered, as are “call in” sessions where offenders hear from IPVI task force members about their offense, their conduct and how to avoid continuing down the wrong path. The response is customized to the individual, said Brady and Ercoli. Individuals are screened when they enter the program.

“For some people, prosecution is warranted,” said Brady. “For individuals who want to change, if they feel like they have a need we’re not meeting, we work to get them what they need.”

While the measure of success can look different based on the person, IPVI is helping many Ulster County residents turn their lives around.

“I have found some people that have gone through that program and have taken it to heart,” said Ercoli.

“They’ve understood that if their behavior continues, they’re going to be looking at some kind of repercussion. It’s definitely a deterrent for some people.”