Trending
You are at:Home»Retiree News»DiNapoli: ‘Your pensions are safe and secure’

State Comptroller Thomas DiNapoli, meeting virtually with the Retiree Executive Committee, holds up a newspaper ad touting the essential services of CSEA members to show his own appreciation of CSEA members.
Retiree News

DiNapoli: ‘Your pensions are safe and secure’

By Janice Gavin on July 23, 2021 0 Comments
State Comptroller Thomas DiNapoli, meeting virtually with the Retiree Executive Committee, holds up a newspaper ad touting the essential services of CSEA members to show his own appreciation of CSEA members. 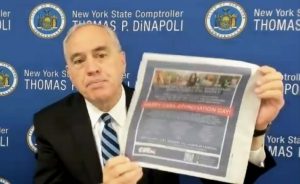 State Comptroller Thomas DiNapoli, meeting virtually with the Retiree Executive Committee, holds up a newspaper ad touting the essential services of CSEA members to show his own appreciation of CSEA members.

“My priority is keeping the plan well-funded,” DiNapoli said.

Due to wise investment decisions and an improved economy, return numbers on fund investments greatly improved from the previous year, when the onset of the pandemic affected the returns.

Shortly after the REC meeting, DiNapoli announced that the New York State Common Retirement Fund was valued at $254.8 billion — a record high — and saw a 33.5 percent return on investments for the state fiscal year that ended on March 31, 2021.

DiNapoli assured retirees and working public employees that their pensions are secure.

“None of you have to worry about your retirements,” DiNapoli said. “They are safe and secure.”
He added that he strongly supports continuing the defined benefit pension, which guarantees a set payment to retirees. “We have a well-managed and well-funded pension fund in New York,” DiNapoli said.

“We have more than enough money for you and for people who are working.”
New York sees a major economic impact from the pension fund, which pays $13 billion in benefits to retirees every year and 80 percent of beneficiaries spend their retirement years in the state.

Economic challenges
DiNapoli said that he is cautiously optimistic about the state’s economic recovery from the pandemic and New York’s long-term economic health.

“It’s been quite a year, considering the public health impact [on the economy],” DiNapoli said. The economy was put on hold. We have come so far and have gotten to a better point, thanks to our essential public employees who have been on the front lines. We’re in a much better place now.”

DiNapoli added that since March 2020, the state has paid $84 billion in unemployment benefits. In 2019, New York paid $2 billion in these benefits. Sales tax collections, an important source of state revenue, also plummeted as businesses closed and consumers cut spending.

“[These numbers really show] how many people have been impacted as far as losing jobs and income as a result of COVID-19,” DiNapoli said.

DiNapoli added that since last spring, slightly more than half of the lost jobs have returned and sales tax collections have improved. Other factors in the state’s recovery include the $12.6 billion in federal aid to New York through the American Rescue Plan, increased income tax rates for higher-income New Yorkers and new state revenue sources approved in the New York State Budget.

“As far as continued progress [for economic recovery], it’s a little slower than we would like, but there is progress,” DiNapoli said. “We’re not back to pre-pandemic [economic]levels.”
DiNapoli touted CSEA’s strong leadership and advocacy on behalf of workers and retirees.

“I’ve always viewed CSEA not only as a very strong union, but a union that advocates not only for its public employees but for retirees as well,” he said.

He also spoke about his mother, who was a member of the CSEA Nassau County Local. “I know how important it was for her when she was working to have a union looking out for her wages and benefits,” he said. “It gave her a great sense of comfort to see what her golden years would be like [financially].”

While DiNapoli’s mother passed away before she retired, DiNapoli noted she plays a role in his own decisions.

“As comptroller/trustee of the pension fund, I keep in mind that there are real people involved,” he said. “I keep that image of my mother in mind to remind me how important the decisions we make are for the retirement security of public workers.”