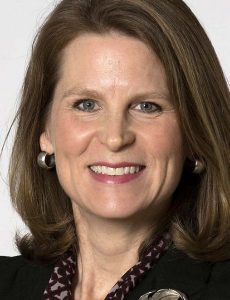 Liz Schuler was recently elected by the AFL-CIO Executive Council to serve as the federation’s president, in a historic move.

Schuler, who had been serving as the federation’s secretary-treasurer, is the first woman to lead the AFL-CIO, which oversees 56 unions and 12.5 million members, including CSEA and AFSCME. She replaces Richard Trumka, who passed away in early August.

Growing up in a union household in Oregon, Schuler got her start in the labor movement as an organizer at IBEW Local 125, which represented workers at Portland General Electric. Over the years, she has fought hard to ensure worker rights and fairness amid corporate efforts to deregulate electricity in Oregon and later helped lead efforts to ensure workers retained a voice in the political process, both on the state and later federal levels.

In 2009, she was elected secretary-treasurer of the AFL-CIO and was the youngest woman ever to serve on the federation’s Executive Council.

“Sister Schuler has fought hard as secretary-treasurer of the AFL-CIO on issues important to all working Americans, and I’m confident she’ll do equally well as our federation’s new president. We look forward to working with her to take back power for workers throughout our country and worldwide,” said CSEA President Mary E. Sullivan.

Replacing Schuler as secretary-treasurer is Fred Redmond, a longtime USW leader in Chicago who had served that union in numerous roles. The terms of Schuler, Redmond and AFL-CIO Executive Vice President Tefere Gebre run through June 2022.