Trending
You are at:Home»CSEA Regions»Southern Region»‘Enough is enough:’ Town of Eastchester members fight for fair treatment 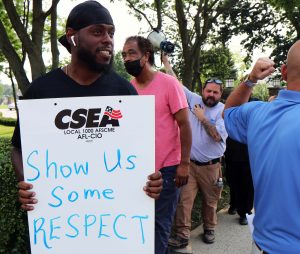 EASTCHESTER — CSEA Town of Eastchester Unit members had support from Westchester County Local and Southern Region officers and activists when they recently rallied outside town hall for better working conditions at the town highway department.

They were protesting a pattern of harassment and bullying from the town highway superintendent that they say has created a climate of fear and has caused stress for many workers.

Members cited behaviors by the highway superintendent that includes him intimidating workers by following them in his town truck, videotaping them working and using the highway department’s radio frequency to rush them as they work. 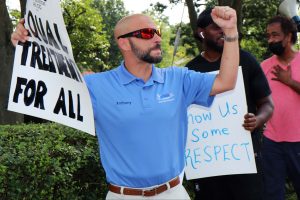 Southern Region President Anthony Adamo speaks out in favor of fairness and respect on the job during a rally held July 21 outside Eastchester Town Hall. Some Town of Eastchester Unit members working in the town highway department have been subjected to harassment and workplace bullying by the highway superintendent.

“I am proud of our members for the courage they’ve shown in saying that enough is enough,” said Southern Region President Anthony Adamo. “No worker should feel sick as they arrive to work, dreading what their boss will say or do that day. A capable manager can do his job and hold workers accountable without resorting to tactics such as bullying and harassment. Everyone has a right to feel safe on the job.”

The unity rally was a first step in raising public awareness about the climate of fear created by the highway superintendent’s management style.

CSEA Westchester County Local President Lionel Turner told town workers that our union, along with friends in the local labor community, will be there to support them. 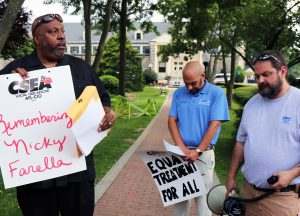 “An injury to one is an injury to all,” said Turner. “Now that we’ve begun to raise awareness of what’s been going on in Eastchester, I’ve had other CSEA locals and units and our friends from other unions reach out to ask how they can help. Our members in Eastchester have been through too much over the years to not have a safe and healthy workplace.”

“When you have a manager who is constantly rushing you while you’re operating heavy equipment and telling you you’re not working hard enough or fast enough, your manager is putting your safety at risk,” said Turner. “Sanitation and highway work is already dangerous enough without putting a reckless manager into the mix.”