DMV MVLE Veronica Zito displays a card road test applicants are now given after a test with information on how they can obtain their results.
CSEA fought and won

By Editorial Staff on August 27, 2021 0 Comments
DMV MVLE Veronica Zito displays a card road test applicants are now given after a test with information on how they can obtain their results.

ALBANY — CSEA members at the state Department of Motor Vehicles (DMV) are now safer on the job after our union successfully fought to end a policy that placed workers at risk for potential violence.

“We knew this practice was putting workers at risk, and it took time to convince the state there was a better, safer way,” said CSEA President Mary E. Sullivan. “Through our union, the DMV workers never stopped advocating for themselves, and together we won a victory for their safety.”

Union members employed at DMV, along with CSEA leadership and staff, worked with DMV management for years to end the agency’s longtime policy of ‘instant notification,’ which required motor vehicle license examiners (MVLEs) to personally hand-deliver news of a pass or fail to applicants immediately following the conclusion of the test, while enclosed in the test taker’s vehicle. 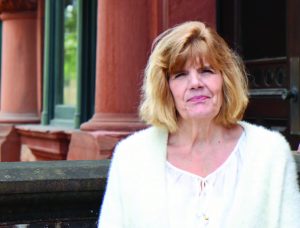 “MVLEs have been threatened by clients and other individuals who arrived with them when road tests were failed,” Stiles said. “Threats of running them over, using physical force and spitting on them. In some cases, family members would arrive at the site, to argue after the applicants left! MVLEs had advised clients to return to the road test sites when something egregious happened during the road tests. In two instances, clients took off with the examiners in the car failing to return to the site. Police were called to pull them over.”

A long fight
In July 2019, CSEA members met with DMV management to discuss the issue. A DMV survey revealed that more than 50 percent of the respondents experienced instances of workplace violence, including being slapped, punched and subjected to profanities.

More than 75 percent of those respondents who had reported experiencing workplace violence, pointed out that the violence or threat of violence occurred after informing the applicant they had failed the road test and while seated in the test taker’s vehicle.

The numbers clearly demonstrated the DMV’s policy of instant notification put the lives and safety of the agency’s MVLEs unnecessarily at risk.

The COVID-19 pandemic only worsened the number of assaults and altercations, spurring union members to continue to advocate for an end to the ‘instant notification’ policy.

DMV MVLE Veronica Zito displays a card road test applicants are now given after a test with information on how they can obtain their results.

CSEA members conducted meetings and surveys, working with our union’s Occupational Safety and Health Department. They had frank conversations, sharing very personal and frightening stories of violence and intimidation in the field. CSEA’s Communications Department ran numerous stories in the Work Force publicly detailing their plight.

Through this feedback, DMV management agreed to CSEA’s request to move to the electronic notification system, but implementation would take time to complete.

However, as CSEA members remained at risk, the union’s Occupational Safety and Health Department suggested a temporary fix in late 2019 that implemented a ‘sealed envelope’ system while the agency continued to work to put in place a permanent electronic fix.

In the ‘sealed envelope’ system, DMV supplied envelopes to MVLEs, who after exiting the test taker’s vehicle, placed the test results in the envelopes and sealed them before giving them to applicants.

While intended as a six-month pilot program, the COVID-19 pandemic delayed the full implementation of the electronic notification system until recently.

“CSEA made a dangerous job better by implementing the stopping of instant notification on road tests.”