Ed Hughes: Stepping up to lead 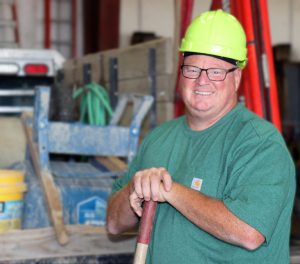 Ed Hughes, shown here on the job at the Hamburg Highway Department, is seeking to replace his boss as the town’s highway superintendent.

HAMBURG — Town of Hamburg residents will be voting for a new highway superintendent this November, and CSEA members employed by the town’s Highway Department are counting on the winner to be one of their own.

Union members, town officials and residents are hoping this will end one of the most dysfunctional, embarrassing chapters in the highway department’s history.

Since Casey took office in January 2018, his term has been full of controversy, including misusing town resources, hiring practices that violate civil service regulations and disrespectful treatment of employees, including attempting to fire an employee with no just cause.

Town employees, town board members and citizens have confronted Casey at every turn about his ongoing unprofessional behavior.

“In all my years of public service, I have never come across someone so inept and ill-suited for their job,” Szymura said in reference to Casey’s attempt to fire the town employee. Szymura also pointed out Casey’s behavior made him unfit for office.

Local media reports documented many of Casey’s actions, including using a town vehicle for personal use, including traveling out of state; hiring his son, who has been accused of sexual harassment and sleeping on the job; putting workers at risk by not providing minimum health and safety standards; pathologically lying and manufacturing suspect testimony on town reports and correspondence; leaking privileged documentation to the media and misleading the town board and others regarding circumstances involving employee relations. Casey also tried to discipline and fire anyone he thought posed a threat to his authority.

In April 2019, CSEA Town of Hamburg Unit members delivered a stunning rebuke of Casey, voting 23-1 in a vote of no confidence. 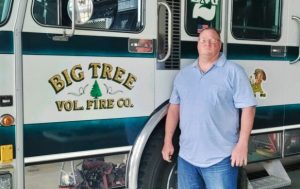 Hughes, a laborer and crew chief at the highway department, said he was mortified by what was happening at his workplace, noting that the department has been in a perpetual state of chaos under Casey’s management.

Hughes, who also works part time as a police officer at the Village of Blasdell, said it was time to take matters into his own hands.

With our union’s strong and early support, along with that of his family and co-workers, Hughes decided to ask voters to elect him as their next highway superintendent.

“Ted Casey showed zero respect for the collective bargaining process or the laws that govern public sector government,” Hughes said. “I could not let this one guy destroy the highway department’s good reputation and how we deliver our public services. I felt compelled to do something about it, so I decided to run against him and remove him from office once and for all. So far, so good.”

Voters agreed, opting for Hughes in the primary at 40 percentage points over Casey. Hughes faces Republican candidate Anthony Bernardi in the general election.

“We have some incredibly talented and dedicated employees in the Hamburg Highway Department,” Hughes said. “We beautify our town, fix the roads and keep the traveling public safe. Our jobs are challenging enough, and we certainly don’t need more obstacles and barriers confronting us.”

Hughes added, “Casey’s anti-union stance, poor decision-making and unethical management style took a good staff and destroyed our morale and our ability to do our jobs effectively. With the voters’ help this November, perhaps we can turn that all around in the new year.”