Gov. Kathy Hochul addresses CSEA and other labor union members and state lawmakers during a Labor Day event at which the governor signed the work zone speed camera bill and several other pieces of pro-worker legislation.
CSEA fought and won

By Editorial Staff on October 4, 2021 0 Comments
Gov. Kathy Hochul addresses CSEA and other labor union members and state lawmakers during a Labor Day event at which the governor signed the work zone speed camera bill and several other pieces of pro-worker legislation. 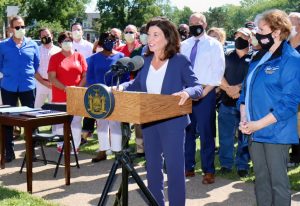 Gov. Kathy Hochul addresses CSEA and other labor union members and state lawmakers during a Labor Day event at which the governor signed the work zone speed camera bill and several other pieces of pro-worker legislation.

BUFFALO — On Labor Day, Gov. Kathy Hochul signed one of CSEA’s highest legislative priorities into law, a bill creating a pilot program to place automated speed cameras in highway work zones, in an effort to force the motoring public to slow down and save lives.

CSEA members and staff were on hand to greet the governor during her visit to her hometown and witness her sign the work zone speed camera bill. Hochul also signed several other pieces of
pro-worker legislation.

“On Labor Day every year, we’re reminded of the vital contributions of organized labor, and that’s why [I signed] four pieces of legislation to help workers thrive across our great state,” Hochul said. “These bills will make sure workers are paid fair wages, receive good benefits and stay safe on their worksites. Our state is home to a long and proud legacy of supporting working New Yorkers, and we’re working to bolster that for the future.”

Also on hand for the signing were the chairs of the state Senate and Assembly’s respective Transportation Committees, State Sen. Tim Kennedy and Assemblymember William Magnarelli.

The speed camera law will place automated speed cameras in active highway work zones, which will go a long way toward keeping those who work on or near highways safer on the job.

The legislation was one of CSEA’s biggest legislative priorities this session, but our union has been lobbying lawmakers to pass a speed camera bill for more than three years. This year, our union’s Legislative and Political Action Department worked with our Communications Department to boost efforts to target legislators, including virtual lobbying, postcards and digital advertising highlighting recent incidents where highway workers were injured by motorists.

“On behalf of all CSEA members who work on or near highways, we thank Governor Hochul for signing this legislation,” CSEA President Mary E. Sullivan said. “Our union members turned up the heat and demanded that our elected officials do something to improve work zone safety. This legislation will save lives.” 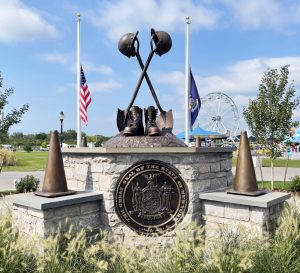 Memorial to the fallen
For the thousands of CSEA members who work on or near highways, this bill is long overdue. Our union lost 57 members due to work zone intrusions since 1983 and many more members have been injured. Other states that have work zone speed cameras in place have reported significant reductions in traffic incidents, injuries and deaths.

Highway work remains one of the most dangerous professions in the United States. According to the federal Bureau of Labor Statistics, 1,844 workers were killed on the job at road construction sites between 2003 and 2017, averaging 123 per year.

Hochul also recently visited the New York State Fairgrounds in Syracuse to unveil a new memorial honoring highway workers who have been killed on the job.

CSEA Central Region President Kenny Greenleaf and CSEA Legislative and Political Action Director Fran Turner represented our union at the unveiling, which was held during the New York State Fair.
“Not only is the memorial a much needed tribute to these fallen workers, it is also a poignant reminder to slow down and stay alert while traveling through work zones,” Sullivan said. 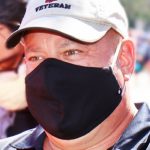 “I am very proud of the fact our CSEA members never gave up the fight to get this legislation passed,” said Erie County DOT Local President Mike Rizzi. “It was also very gratifying to be with Governor Hochul on Labor Day when she signed the bill into law. This bill, if properly executed, will give us one more instrument in our toolbox to protect our highway workers and hold the traveling public accountable when they break the law. I especially want to thank our Buffalo area New York State Senator Tim Kennedy for sponsoring this legislation.” 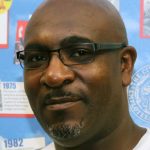 “The passage of this legislation will help provide a safer working environment by cutting down on aggressive drivers speeding through construction zones,” said CSEA Department of Transportation (Babylon) Local President Richard Allen. “I really appreciate CSEA for aggressively pushing to get this legislation passed. It shows that CSEA has a deep consideration for the Department of Transportation and we [DOT workers] appreciate that.”