Trending
You are at:Home»Annual Delegates Meeting»Reese serves as tireless advocate for our union

Reese serves as tireless advocate for our union 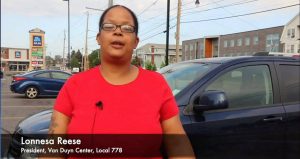 SYRACUSE — Van Duyn Nursing Home Local President Lonnesa Reese said she was surprised to be honored with the Danny Donohue Leadership Award for the Private Sector.

But if you ask her CSEA labor relations specialist, it was a no brainer.

“Lonnesa is one of the most dedicated union leaders I know. She shows up to work early and leaves late” said Jason David, a CSEA labor relations specialist who is based in the Central Region. “Walking through the building, it’s clear to see how much she cares about members because she always knows everyone’s name and asks about their lives outside of work.”

Reese rose quickly from member to activist to a strong leader in her local when the nursing home transitioned from public to private sector in 2013. Because of her prior union experience with SEIU 1199, taking on a leadership role with CSEA was no problem.

“I wanted to continue being a union leader,” Reese said. “I just like to help others and be there for them if I can.”

Reese is known to tirelessly represent her members.

“I love how knowledgeable she is,” David said. “She is always able to tie management up because she documents everything and can bring it up at the right moments.”

She’s been a steady presence for local members at the nursing home as supervisors and management seem to turn over frequently. Van Duyn is already a challenging place to work for many members, and the global pandemic made it even more difficult.

“In the face of COVID-19, Lonnesa led the fight to ensure all members had the proper protective equipment and knew how to correctly use it,” Central Region President Kenny Greenleaf said.

Reese said it’s been hard to recruit co-workers to join the ranks of the union or become a steward.

“We have a lot of complaints, but no one wants to step up and help,” Reese said.

But even if it’s just her fighting the good fight, she’s not going to stop.

“There was one week I was out sick and in the hospital, and I was still representing people,” Reese said. “They were telling me to rest and get better, but I was still doing my union work from the hospital.”

It’s a true testament to her relentlessness and continued dedication for members at the nursing home.