Trending
You are at:Home»Annual Delegates Meeting»Listening plays a key role in Berkowitz’s activism 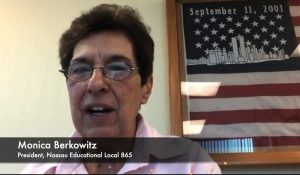 Berkowitz accepts her award at the ADM.

Berkowitz was first inspired to become an activist by a teacher who told her to, “put up or shut up” after Berkowitz kept using the teacher as a sounding board to complain about issues at the school.

She has used that motivation to help make many positive changes for CSEA members.

Berkowitz believes it is her ability to empathize and be a good listener that has made her the leader she is today.

When members call the Nassau Educational Employees Local Office simply because they need to vent and not necessarily because there is a problem that the school district is contractually obligated to fix, Berkowitz will listen.

“When someone calls the local, I ask them, ‘Is this a grievance or is this a gripe?’” said Berkowitz. “Either way, I’m going to listen to the member, but the difference is – I know that we can take action if their supervisor violated their contract. There’s nothing I can do to help if they’re angry with their supervisor and want to vent.”

Not one to limit herself to working strictly in her local, Berkowitz is also a member of several region and statewide committees.

With such a full schedule, it can be difficult to make time for a professional and personal life, but Berkowitz understands that union leadership is not a 9-to-5 job.

“This job is working weekends and nights and taking phone calls from people at all hours,” said Berkowitz. “About 6,000 people have my cell phone number.”

Berkowitz credits the Nassau Educational Employees Local Board for being an immeasurable support to her and always willing to jump in and “do what needs to be done.”

Being a strong leader herself, Berkowitz sees the importance of seeking out activists who can lead CSEA into the future, which is why she was very particular about who she asked to join the local’s leadership team during the last election cycle.

Two of the new members of the Nassau Educational Employees Local Board are unit presidents who Berkowitz had the opportunity to observe over the years. She was very impressed by their problem solving skills and ability to work independently. The other new addition to the local board never held an officer position, but Berkowitz added her to the team because she was a hard worker and wanted to get involved.

“All of them give me a sense that when it’s time for me to walk away, I will be leaving this local in good hands,” said Berkowitz.

As a local officer, Berkowitz works with people on many different levels throughout CSEA and the Nassau County school districts. Her ability to cultivate relationships and work well with others are important skill sets that make her a strong leader.

“It’s very important to listen and try to understand the other person’s point of view,” said Berkowitz. “You may not always agree, but as long as you come to a mutual understanding that will be to the betterment of the membership, it’s OK.”

As for new activists, Berkowitz advises that they attend trainings offered by CSEA’s Education and Training Department. She also stresses the importance of setting goals and reaching out for help when you need it.

“You can’t know everything and there’s always someone who knows more than you” said Berkowitz.

Following her own advice, Berkowitz currently reaches out to CSEA President Mary E. Sullivan, Executive Vice President Denise Berkley and CSEA Oyster Bay Local President Jarvis Brown, who she said have all been a tremendous support to her.

One call that Berkowitz will never forget is the one that she received from Sullivan, informing her that she won CSEA’s leadership award.

“I was blown away,” said Berkowitz. “I never thought in a million years that I would win this award. I just come to work every day and do what I need to do to help people.”