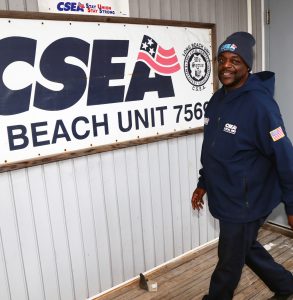 LONG BEACH — CSEA City of Long Beach Unit member Norman Wilson is proof positive that if you exercise some patience and trust CSEA, you will reap the rewards of union representation.

CSEA City of Long Beach Unit President John Mooney and unit activists worked together for two years to get Wilson’s job back after the city wrongfully terminated him two years ago.

After an incident that led to disciplinary charges, Wilson had been suspended without pay.

Pursuant to the state Civil Service Law Section 75, a disciplinary hearing was held. While Wilson was cleared of charges under one count, he was found guilty of another. The hearing officer recommended a suspension and letter of reprimand be placed in Wilson’s file until July 2021.

Despite this recommendation, city officials opted to ignore it and terminated Wilson’s employment.

Wilson, an 11-year city employee with a previously clean disciplinary record, had also taken steps on his own to amend the situation even before the hearing.

After Wilson was terminated, CSEA was determined to continue his fight, appealing the termination through arbitration.

“There is a section in our contract that allows us to seek out a non-biased arbitrator,” said Mooney. “Most Section 75 disciplines indicate that you can appeal a ruling, but we [the City of Long Beach Unit]can take a step beyond that and take the issue to an arbitrator that isn’t being paid by the city, so the decision will be in the hands of someone that doesn’t

have a conflict of interest.”

Because of the unit’s success, city officials are trying to push CSEA to remove the clause from their union contract.

“We are not giving that up!” Mooney said of the clause.

Through the entire arbitration period, CSEA members ensured Wilson was kept up-to-date of what was happening during proceedings. This frequent outreach by members and representatives impressed on Wilson that CSEA is a union family that would not stop fighting for him.

“I had members checking on me intermittently the entire time I was out, said Wilson. “It let me know that I wasn’t by myself.”

In the end, the neutral arbitrator instructed the City of Long Beach to restore Wilson to his position, including restoring all years of service and seniority, as well as full back pay, less his initial suspension.

While Wilson is back on the job, city officials are holding out on restoring Wilson’s supervisor job title. CSEA will continue to fight until the city upholds the arbitrator’s decision in its totality.

“From the day that I [joined the]union, I worked on my integrity, my character and establishing a good name,” said Wilson. “The worst thing about this situation is that my name was dragged through the mud by the city. Winning this arbitration put me back on the road to restoring my good name.”

The entire experience has solidified the importance of having CSEA in his corner.

“Being a part of CSEA provides me with protection from wrongdoings by administration,” said Wilson. “Every day that I put on my uniform, it reminds me that I have my CSEA family behind me.” 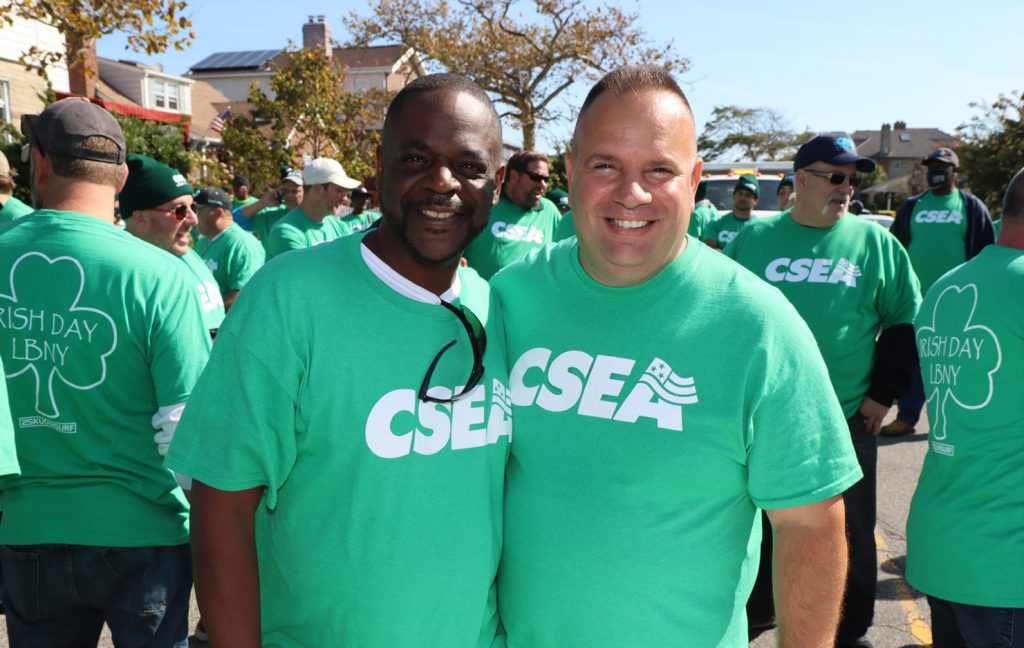 Norman Wilson, left, seen here with CSEA City of Long Beach Unit President John Mooney, was happy to walk in the city’s Irish Day Parade, which was Wilson’s first major event with the city unit since being re-hired.