NEWBURGH — Following a nearly two-decade fight, CSEA-represented firefighters working for the state Division of Military and Naval Affairs (DMNA) now have the same disability retirement benefits as other firefighters across the state.

In October, Gov. Kathy Hochul signed legislation sponsored by State Sen. James Skoufis and Assemblymember Peter Abbate that amends existing law to incorporate DMNA, ensuring that airport firefighters developing cardiac disease, cancer, and other conditions connected to their employment will receive 50 percent of their final average salary should they retire on disability.

CSEA has been lobbying state lawmakers on this issue since the Pataki administration. 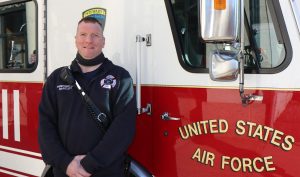 “We are grateful that our state elected officials recognized that DMNA firefighters face the same dangers and risk factors as other firefighters and therefore deserve the same protections,” said CSEA Hudson Valley DMNA Employees Local President Jason Bartley, an airport firefighter at Stewart Air National Guard Base in Newburgh, which is in Skoufis’s district.

“For many of these firefighters, their duties extend beyond the airport or the base to supply mutual aid to area fire companies, which is just one of many reasons why making sure they have comparable disability protections is a no-brainer,” said Skoufis, who welcomed CSEA Hudson Valley DMNA Employees Local members to a news conference announcing the legislative victory. 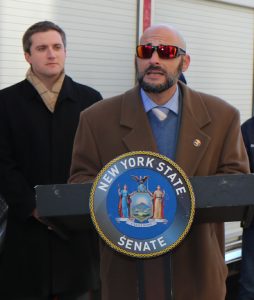 Southern Region President Anthony Adamo noted the persistence of Skoufis and other state lawmakers in re-introducing the legislation in Albany numerous times.

“While this legislation should have been approved years ago, CSEA members didn’t give up on this fight for fairness and neither did our friends in the Senate and Assembly who have been working for years to get this across the finish line,” said Adamo. “Unlike her predecessors, Governor Hochul didn’t hesitate to support this legislation. The airport firefighters who put their lives on the line every day are finally being equally recognized for their work and sacrifices.”