Trending
You are at:Home»Statewide»Director of Organizing Bob Compani retires from CSEA

Bob Compani works at an Organizing information table at a CSEA event.
Statewide

By mathew.cantore on December 30, 2021 0 Comments
Bob Compani works at an Organizing information table at a CSEA event. 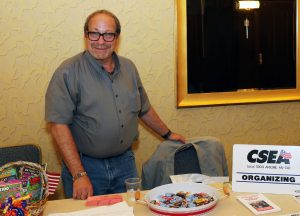 Bob Compani works at an Organizing information table at a CSEA event.

ALBANY — Bob Compani retired as CSEA’s Director of Organizing at the end of December after 20 years with our union.

In 2001, Bob joined CSEA as a Strategic Campaign Coordinator, a career move he calls the best move of his life.

Bob also served as the union’s Director of Strategic Campaigns and Director of the Private Sector before becoming CSEA Director of Organizing in late 2016.

“CSEA is an outstanding place to be and it’s been a pleasure to help our union grow,” he said.

Bob was instrumental to these efforts. In 2009, he served as lead negotiator for the first contract signed with New York State for members of the newly formed Voice of Independent Childcare Educators (VOICE) Local in CSEA.

Bob has also greatly expanded CSEA’s private sector membership, taking a lead role in successfully negotiating the initial contracts for members at Quality Services for the Autism Community (QSAC) and Lifespire. He also expanded the union’s relationship with Sodexo management, leading to more members joining our union. Bob also developed relationships with buyers of public nursing homes that were being privatized, ensuring CSEA members working there would remain in our union when the nursing homes were sold.

“I can’t stress enough how easy the job is because our members are motivated, our leaders are focused and our resources are plenty,” he said.

Bob became involved with unions very early on in life, becoming a member of the Amalgamated Clothing and Textile Union (ACTU) in the 1970s after taking a job in a leather tannery in Gloversville, in Fulton County, right out of high school. He became increasingly involved with ACTU as a member, becoming a volunteer member organizer full time before being hired by ACTU as a full-time organizer.

Among Bob’s many accomplishments, he lists his victory in organizing around 350 members for the Troy Shirtmakers Guild who worked at the Tom James Company in Glens Falls as one of his proudest because it was so close to home for him.

Around that same time, he began looking for a job that would keep him in New York, where he had a young and growing family, and wanted to spend less time on national campaigns. He took a position as Director of Organizing at the Service Employees International Union (SEIU) in 1999, serving there for more than a year before joining CSEA.

“Bob has been instrumental in growing our union for over two decades and we will miss him greatly,” said CSEA President Mary E. Sullivan. “I would like to thank him for his service and dedication and I hope he will thoroughly enjoy his well-deserved retirement.”