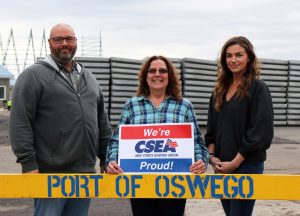 OSWEGO — Wanting to lock in their benefits, Port of Oswego Authority workers recently organized a union with CSEA.

They are now working under their first union contract.

“We have great health insurance and we wanted to have job security if a director tried to retaliate,” Port of Oswego worker Meghan Wharendorf said. “By organizing, we gained some backing and legal recourse through the union.”

Wharendorf, a 15-year employee who oversees human resources and payroll, was one of the first workers to broach the idea of unionizing after employees grew tired of working under the previous director.

“(He) was horrible and a lot of us were afraid because we didn’t have a union in case things went south,” she said.

As a state authority, the port director is appointed by the governor, so there were no guarantees who could be in charge next.

The current director, Bill Scriber, worked with Wharendorf in his former role to help support organizing efforts before taking the helm.

“Bill and the board of directors have been able to help make it a smooth process,” Wharendorf said. “We’ve been able to work together in a very easy and cooperative manner. It’s been a great partnership we’ve found ourselves in, which may not be always the norm.”

In addition to a great partnership with management, several port workers were already familiar with CSEA.

Pam Dowd was a CSEA member at the Oswego City School District before she was hired as a scales and inventory clerk at the port.

“(Pam) wasn’t here when we started (organizing). But when she came, she really helped push things along,” Wharendorf said. “I was starting to get the feeling (unionizing) was never going to happen, then she came and brought some fresh energy.”

And just down the Oswego River are CSEA members who work for the state Canal Corp. operating and maintaining the locks.

The positive impact CSEA has had on co-workers and community members in Oswego County played a key role in garnering trust between the port and the union.

The port is a New York State Authority, but not part of the state contract or budget. Receiving zero tax dollars, the port operates on its own revenue.

As the first deep-water port of call on the Great Lakes in the U.S. from the St. Lawrence Seaway, the Port of Oswego plays a vital role in domestic and international shipping. The port sees around 120 vessels and 1 million tons of cargo annually.

But the biggest impact the port has is on the City of Oswego, hence its nickname, the Port City.

According a study by the Great Lakes Seaway Partnership, in 2017, the port supported 209 jobs, $26.7 million in economic activity, $13.8 million in personal income and local consumption expenditures, and $5.8 million in federal and state tax revenue.

Moving forward, the port workers hope to forge a more positive relationship with city leadership. Some officials had criticized an economically important grain silo project at the port because they claimed the structure would block a view of a historic lighthouse.

With further investments and expansion coming to the port, CSEA hopes to grow along with it. 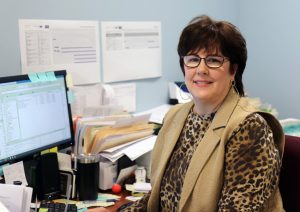 Deborah Godden, accounting manager at the Port of Oswego, is a proud CSEA member. 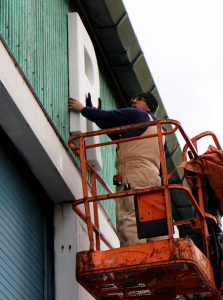 James Miner, a laborer at the Port of Oswego, works to refurbish the “Oswego Port Authority” sign on the side of the building. 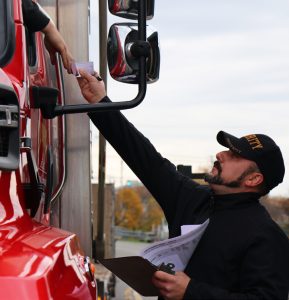 George Lundy, the port’s security supervisor, makes sure nobody gets to the port area without checking in first.