Trending
You are at:Home»Awards»‘There for more than just a paycheck’: Fernandez honored for service

Abel Fernandez, right, poses with his award for TBR News Media Person of the Year with his colleague, Linda Parlante, who nominated him.
Awards

‘There for more than just a paycheck’: Fernandez honored for service

By Wendi Bowie on February 28, 2022 0 Comments
Abel Fernandez, right, poses with his award for TBR News Media Person of the Year with his colleague, Linda Parlante, who nominated him. 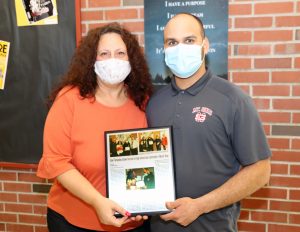 Abel Fernandez, right, poses with his award for TBR News Media Person of the Year with his colleague, Linda Parlante, who nominated him.

MOUNT SINAI — For Mount Sinai High School Head Custodian Abel Fernandez, unplanned service requests during the workday is not abnormal, which is why he was not surprised to receive a call to go to the school’s main lobby to help address an issue.

But this was not just any other day.

As Fernandez rounded the corner to enter the lobby, he wasn’t met by a sudden service request, but with applause and cheers from his family and colleagues.

Fernandez’ family and co-workers gathered together to celebrate Fernandez being named TBR News Media Person of the Year for 2021. The award, presented by the group of six weekly Suffolk County newspapers, recognizes outstanding members of the community.

He was nominated by CSEA Mount Sinai School District Non-Instructional Unit member Linda Parlante, who works as a secretary to the district’s facilities director.

“I felt really honored and lucky to have co-workers like Linda Parlante who would go to the trouble to nominate me,” said Fernandez. “It was very emotional.”

Anyone who has been fortunate enough to see Fernandez in action over his seven years working at Mount Sinai High School will understand why he is so deserving of the honor.

“I remember when Abel was a 21 year-old kid who just got hired,” said CSEA Mount Sinai Non-Instructional Unit President Michael Hagenburg. “To see him start as a sub [someone working as a fill-in]and see him rise through the ranks and become a head custodian and now TBR News Media’s Person of the Year makes me really proud.”

“I truly believe that the school district stopped bringing in contractors because really good people like Abel started working here,” said Hagenburg. “They saw that union people are good, hardworking people who are assets to the district.”

Fernandez goes above and beyond his assigned custodial duties by lending a helping hand to members of the maintenance department, as well as volunteering to work various school events.

“It’s important for the kids to see that you care about them and that you’re there for more than just a paycheck,” said Fernandez. “I chaperone football games, help direct traffic during school events, help set up for the prom and other things like that.”

Dedicating that amount of time and effort has developed his relationships with the parents and children of the district.

“There are always the kids that will say hello to you in the hallway or give you a nickname,” said Fernandez. “Years ago, there was a kid who called me [rapper]Drake because he thought I looked like him [laughs].” 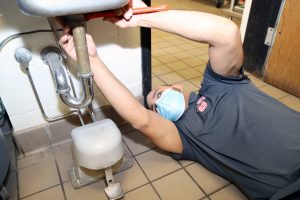 As someone who lives and works in the community, it’s not uncommon for Fernandez to see children who have graduated from the school. On those occasions, the former students never hesitate to run over to say hello.

Fernandez also acts an interpreter for the Mount Sinai School District, which has an increasing number of Latinx families moving there. Fernandez’ work in helping teachers and administrators communicate with Spanish-speaking parents has been an immeasurable help to the community.

A self-claimed, “go with the flow kind of guy,” Fernandez takes the days as they come and believes in leading by example.

“People tell me that I should delegate more, but I don’t want to,” said Fernandez. “The guys I work with know that I’m the first one to get down and dirty in the job.”