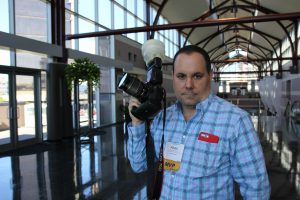 ALBANY — After 33 years with our union, CSEA Director of Communications Mark Kotzin has retired, leaving behind an accomplished career and legacy in labor communications.

“Mark has given over 33 years of service to CSEA and we are grateful to have had his contributions to our Union,” said CSEA President Mary E. Sullivan. “I know he’s looking forward to spending more time with his family and we wish him all the best in retirement.”

“It’s been such a privilege to advocate on behalf of the members of CSEA over the past three decades, and to work with such a stellar team of communicators,” Mark said. “It’s my hope that over the last 33 years, I’ve been able to improve the lives of working people through my work. CSEA has always been a huge part of my life, and I’ll miss my union family as I seek out my next adventures.”

Mark began his CSEA career as a college intern at CSEA Headquarters in 1989. Later that year, he started as a communications specialist based at our union’s Central Region Office in East Syracuse.

For almost 30 years, he directed all communications initiatives on behalf of about 45,000 union members throughout our union’s largest geographic region, covering 20 counties throughout Central and Northern New York and the Southern Tier. In 2019, then CSEA President Danny Donohue appointed him to serve as our union’s Director of Communications. 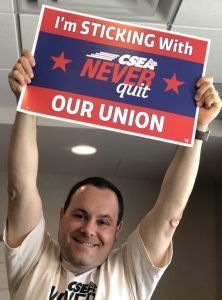 Besides rising to the highest staff position in CSEA Communications, Mark’s accomplishments within CSEA over the years include shepherding the union’s regional communications into the digital era, creating and managing our union’s annual presence at the New York State Fair and the successful promotion of labor-community partnerships, such as with Special Olympics, for which CSEA members throughout Central New York raised more than $200,000 over more than a decade.

In 2008, he was honored by his co-workers with the Kim Hytko Memorial Award, given in recognition of his dedication to family and friends.

Mark said he is a strong believer in servant leadership and was proud to graduate from Leadership Greater Syracuse, a selective community leadership program, in 2012. As a professional communicator, he previously served on the boards of the Central New York Chapter and Northeast District of the Public Relations Society of America.

Outside of work, he has been involved in various community causes, including serving on the board of Temple Concord in Syracuse and leading their annual Christmas holiday meal committee and their twice-a-year blood drives in partnership with the American Red Cross. As a regular blood donor, he recently gave his 14th gallon donation.

Mark is an Albany area native who enjoyed spending time with his mother during his time at Headquarters over the past three years. Upon his retirement, he joins his wife Ellen and his two grown children, who currently live in Pittsburgh, Pa.