Maureen Malone addresses members at a CSEA conference, circa 2006.
Statewide

By Janice Gavin on May 31, 2022 0 Comments
Maureen Malone addresses members at a CSEA conference, circa 2006. 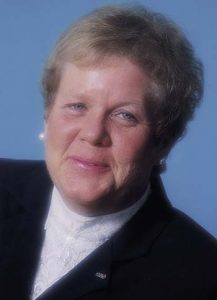 CSEA is mourning the loss of former Statewide Treasurer Maureen Malone, who passed away on April 20, 2022. She was 72.

A CSEA leader and activist for more than 40 years, Maureen held leadership roles on every level of our union, including as Statewide Treasurer from 1994 until retiring in 2007.

“Maureen and I started out as CSEA Local Presidents in Region 5 and, over the years, were fortunate enough to serve our Union as statewide officers,” said CSEA President Mary E. Sullivan. “She was my critic, my advisor, and my loyal friend for many years. She was always smiling, quick with a joke, and a powerful advocate for the members she faithfully represented. I will miss her very much. Rest in Peace, my Union sister.”

An Oneida native, Maureen’s involvement in our union began in 1974 when she faced an injustice at her job as a Madison County medical laboratory technician. She began her CSEA activism when she attended a Central Region meeting, and soon joined the CSEA Board of Directors as the Madison County representative.

“The only way to correct the problems at work was to become a CSEA activist,” she told The Work Force shortly before retiring in 2007. 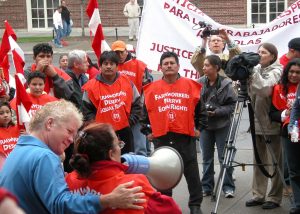 Maureen Malone gives support to farmworkers during a rally outside CSEA Headquarters in 2005.

After leaving Madison County employment, Maureen had worked at AFSCME and owned a yarn shop. In 1983, Maureen once again joined CSEA when she began working at Mohawk Valley Psychiatric Center. She later worked at SUNY Upstate Medical University in Syracuse.

Maureen served in numerous leadership positions in the Madison County Local and Central Region, including as the region’s 2nd vice president, corresponding secretary and treasurer. She also served on numerous CSEA committees, lending her experience with both local and state government to her positions. 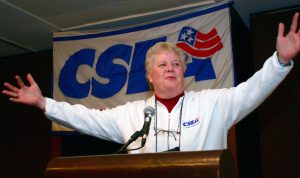 Maureen Malone addresses members at a CSEA conference, circa 2006.

In 1994, Maureen was elected CSEA’s Statewide Treasurer, serving in that office until her retirement.

As Statewide Treasurer, Maureen not only ensured our union’s responsible finances, but she helped train other treasurers across the state.

She also stood strong alongside CSEA members during some of our union’s most challenging times during the 1990s. 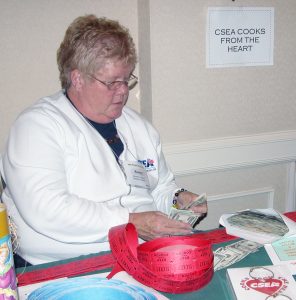 Maureen Malone sells the “CSEA Cooks From the Heart” cookbook at the 2006 Women’s Conference. The cookbook sales benefited people affected by hurricanes Katrina and Rita.

Maureen said one of her proudest moments as Statewide Treasurer was her work in developing the CSEA flag quilt that members and staff sewed together during the 2001 Annual Delegates Meeting in Buffalo, held weeks after the 9/11 terrorist attacks.

The quilt, which features squares, stars and “helping hands” depicting officers, locals and staff, was especially poignant to Maureen.

“The quilt represents a lot of our pride and everyone pulled together and put it together,” she said. “It was awe-inspiring.”

She was also proud of leading the union’s efforts to help those affected by Hurricanes Katrina and Rita on the Gulf Coast, including spearheading the “CSEA Cooks From the Heart” cookbook that includes recipes from members and staff. 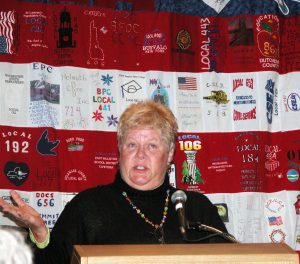 She was also extremely proud of the opportunities she had received as a CSEA leader, including attending President Bill Clinton’s 1997 inauguration.

Maureen also played a key role in one of CSEA’s most significant actions — affiliating with AFSCME in 1978. She had served on the International’s blue ribbon panel that studied the affiliation.

“The affiliation was one of the greatest changes in my time here,” she said in 2007. “It made us part of the AFL-CIO. Our affiliation with AFSCME gave us a national presence and standing that has been positive for CSEA.”

After retiring, Maureen worked for Pearl Insurance in client relations from 2007 until 2009. She also was elected as treasurer of the Oneida-Madison-Herkimer Tri-County Retirees Local in 2017, a post she served in briefly before moving to Alabama.