This year’s national theme for summer reading is “Oceans of Possibilities.” CSEA members, from left, Sara Scoggan, Taylor Beach and Bonnie Sakow have ocean-themed story times and other programs in the summer lineup at Newburgh Free Library.
Capital Region

Summer: brought to you by CSEA members

By Editorial Staff on May 31, 2022 0 Comments
This year’s national theme for summer reading is “Oceans of Possibilities.” CSEA members, from left, Sara Scoggan, Taylor Beach and Bonnie Sakow have ocean-themed story times and other programs in the summer lineup at Newburgh Free Library. 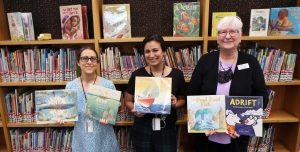 This year’s national theme for summer reading is “Oceans of Possibilities.” CSEA members, from left, Sara Scoggan, Taylor Beach and Bonnie Sakow have ocean-themed story times and other programs in the summer lineup at Newburgh Free Library.

NEWBURGH — You don’t have to travel far from home to broaden your horizons.

Just head to your local library.

That’s what CSEA members at Newburgh Free Library are encouraging children and families to do this summer.

Library staff have spent months building summer programming at the library’s two branches, aimed not only at fostering a love of reading but also learning new skills. While some summer camps in the area are pricy and out of reach for many families, the library offers similar enrichment opportunities accessible to all.

“I always say that the library is the last place where you can come and you’re not expected to buy anything,” said Taylor Beach, the teen and outreach librarian at Newburgh Free Library.

Fostering a love of reading 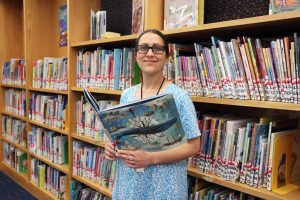 Sara Scoggan, early literacy and parenting librarian at the Newburgh Free Library, is shown on the job.

Library staff in Newburgh are using elements of the national Collaborative Summer Library Program’s 2022 summer reading theme of ‘Oceans of Possibilities,’ adding beach-themed elements to some story times and other programs.

“One of our first events is a celebration of the book ‘20,000 Leagues Under the Sea,’ which was published 152 years ago,” said Sara Scoggan, early literacy and parenting librarian.

The summer programs are promoted within the community and school district. With many new families moving to the Newburgh area during the pandemic, librarians are looking forward to welcoming new library patrons while welcoming back frequent visitors.

The goal of summer programs is to foster a love of reading in younger children and help older children continue building their literacy skills.

Scoggan plans a variety of events throughout the summer, aiming for programming that can include the whole family, which is helpful for families with children of different ages.

“Those are my favorite to plan because you can try to have a little bit of something for everyone and everyone feels they can come and participate,” said Scoggan. 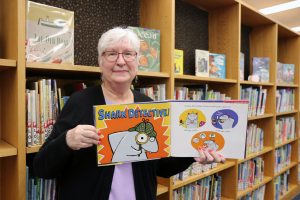 Bonnie Sakow, a librarian at the Newburgh Free Library, is involved in summer reading programs to keep local children engaged.

In addition to story times, popular events include Tail Waggin’ Tutors (overseen by fellow CSEA member Bonnie Sakow, which allows early readers to build their skills by reading to therapy dogs), crafts, events in the story garden and yoga. Children are encouraged to participate in the library’s reading challenges. Librarians will even customize lists of recommended books for children based on specific interests. 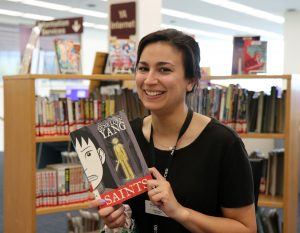 CSEA member Taylor Beach, teen and outreach librarian at Newburgh Free Library, counts the library’s Anime and Manga Club as a favorite with local teens. Manga, a style of comics that originated in Japan, and graphic novels in general have spiked in popularity with younger readers.

With some older children less interested in reading, Beach works to create programs that accommodate their current interests and incorporates feedback from teens and tweens.

“A lot of teens are into manga and anime,” said Beach. “We also see a lot of interest in the Marvel and DC comic books. Graphic novels have become hugely popular.”

This year, the existing year-round Girls Who Code club will be offered as a two-week, half-day summer camp in which girls learn to build websites. Teen yoga (Beach is a certified instructor) is also on the schedule.

“So long as you keep kids reading and keep them engaged, that combats that summer slide,” said Scoggan. 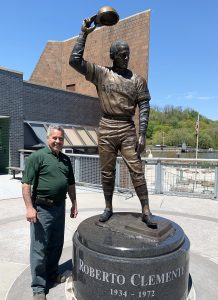 BRONX — Not unlike the park’s namesake, the next worker to replace David Lucas at Roberto Clemente State Park will have some big shoes to fill.

“I’ve been working here close to 47 years,” said Lucas, the park’s maintenance supervisor. “I started when I was 17. (I) went to school during the day and worked at night.”

His attraction and love for the park also mirrored the passion the legendary Roberto Clemente, the baseball Hall of Famer who played for the Pittsburgh Pirates, had for America’s favorite pastime.

Clemente died on Dec. 31, 1972, while en route to Nicaragua from his native Puerto Rico. Clemente had loaded supplies for people affected by a devastating earthquake onto a plane that had a spotty mechanical record. He volunteered to travel with the supplies to ensure affected people received the aid. The plane crashed into the deep waters of the Atlantic minutes after takeoff, claiming the lives of all on board.

“Not everyone would have done what he did,” said Lucas. “Special people do that.”

Lucas and the workers at Roberto Clemente State Park embodied Clemente’s spirit and honored his lifetime of charitable work when they collected, sorted and help deliver tons of relief supplies to the people of Puerto Rico following a major hurricane in 2017.

“It goes back to pride. When Puerto Rico had the storm, we did a lot of work on that,” said Lucas. “We were doing the same thing [Clemente] died doing and carrying on that tradition.”

Lucas fondly recalled Clemente even as he trounced Lucas’ beloved Mets in his last season with the Pirates to garner his 3000th hit.

“I remember watching that game,” said Lucas. “He was a great guy, wasn’t selfish and was very proud. That’s something Latino people have a lot of – pride.”

It’s the same pride in his job that allowed him to raise a family and to now care for his mother and a grandson, Noah Lucas, whom he’s already planning to enroll and coach at a Clemente sports program.

While he’s looking forward to retirement, Lucas shared that one element that’s driven his longevity is his interaction with the public and how important the park is in their lives, especially during the gloomiest days of the pandemic. 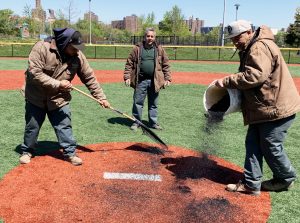 “People need to come to our parks and relieve their stress,” said Lucas. “Here, they get to calm down.”

As he winds down his career, Lucas imparts tricks of the trade to younger workers and prepares for fishing trips with family, Lucas reflected on past co-workers and friends who inspired and encouraged him.

He’s done the same for Jason Anglada, a parks worker who also started when he was 17 and has now spent 18 years at Clemente.

“He’s been like a father to me, giving me advice and teaching me the ropes,” said Anglada.

Having amassed a wealth of knowledge and on-the-job skills over the years from fixing water main lines to landscaping and operating tractors, Lucas surreptitiously revealed why leaving is bittersweet.

“There are jobs out there that you can enjoy. Not everyone has to work in an office,” said Lucas. “I recommend this job to anybody.”

From left, Niagara Frontier Parks and Recreation Local members Ryan McGrath and Travis Saturley pose in front of the Canadian side of Niagara Falls.

Members find joy while maintaining Cave of the Winds deck

NIAGARA FALLS — Every spring, CSEA members in the Niagara Frontier Parks and Recreation Local brave the wet, windy and treacherous conditions at the bottom of Niagara Falls to do annual maintenance to the Cave of the Winds deck. 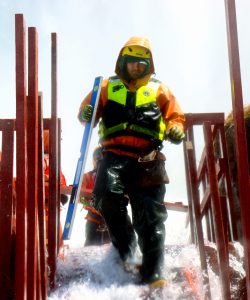 CSEA Niagara Frontier Parks and Recreation Local member Griffin Kent walks through gushing water to go down the stairs to the main deck.

On a recent sunny day, the workers, dressed head to toe in bright orange waterproof jumpsuits and sporting matching hardhats, trekked up the unfinished stairs that bring them just feet from the roaring waterfall, where they will rebuild the railings.

While working near a raging waterfall can bring with it potential risk for injury or death, even with strong workplace safety and health protections, the workers are doing their duties with huge smiles on their faces like this is just normal, everyday life, which it is for many of them. 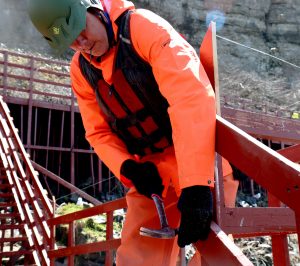 CSEA Niagara Frontier Parks and Recreation Local member Travis Saturley hammers a nail into a railing of the Cave of the Winds lower deck.

As the workers cut two-by-fours and hammer them into place, they occasionally joke with each other to make the best out of a task filled with potential hazards.

Without hardworking CSEA members to prepare the deck for the season, tourists from around the world who come to Niagara Falls every year wouldn’t have access to such an up-close, immersive experience at one of the natural wonders of the world. 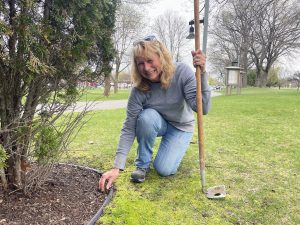 Town of Colonie Parks and Recreation worker Lori Smalley gets a head start on preparing The Crossings for the season.

COLONIE — CSEA members who work at Town of Colonie Parks and Recreation Department recently got a head start on preparing the town’s largest park, The Crossings, for the season, including maintaining the park’s Veterans Memorial fountain. 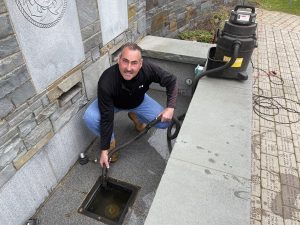 Landscaping and maintenance is a year-round effort for town employees at the ‘crown jewel,’ as the park is known.

Located near Albany, the 131-acre park is community hub for recreation with miles of trails, bike paths, playgrounds, pavilions and community meeting rooms.