CSEA Dutchess County Unit member Gabriela Vega-Matthews is determined to get everyone counted in this year’s U.S. Census.
2020 Census

By Jessica Ladlee on January 24, 2020 1 Comment
CSEA Dutchess County Unit member Gabriela Vega-Matthews is determined to get everyone counted in this year’s U.S. Census. 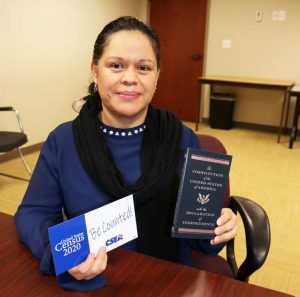 v\CSEA Dutchess County Unit member Gabriela Vega-Matthews is determined to get everyone counted in this year’s U.S. Census.

POUGHKEEPSIE — CSEA member Gabriela Vega-Matthews passionately believes that participating in the U.S. Census is our civic obligation, and she’s working hard to ensure her fellow Dutchess County residents understand why.

Recognizing that increasing participation compared to the 2010 census is crucial for fair federal funding, county leaders last year formed the Dutchess County Complete Count Committee. Well known as an advocate for the local Latino community, Vega-Matthews was asked to volunteer as a member of the committee.

Vega-Matthews had words of encouragement for fellow CSEA members.

“If you’re not involved, you can’t help make change,” said Vega-Matthews, a community health outreach worker at the Dutchess County Department of Behavioral and Community Health. “As a county worker and CSEA member, I recognize that the census data results can jeopardize important programs for our local community members, which can also put jobs at risk.”

Every person counts
One of the goals the committee has is to improve participation among residents that census officials have determined are part of the ‘hard-to-count’ population. In a report recently released by the New York State Complete Count Commission, nearly 5 million New York State residents are included in this population, largely due to language barriers, lack of internet access and members of transient communities such as renters or college students.

In Dutchess County alone, more than 69,000 people are considered ‘hard to count,’ including residents with language barriers, migrant workers in farming communities and residents of rural communities. Different people often have different reasons for not participating.

“We have vulnerable community members who we should be advocating for,” said Vega-Matthews. “All of our communities should be represented with dignity because they are part of the process. These communities are part of maintaining the economy of this country. As a grassroots community organizer, it’s important that everyone be included.”

Working with community groups across the county, Vega-Matthews hopes to encourage Dutchess County residents to overcome their concerns and be counted.

Reaching out in different ways
Vega-Matthews said proactive outreach ahead of time can make the census process easier. Taking part in community events has been one way to engage residents. Advertising in the form of posters and billboards is also a possibility.

Vega-Matthews is especially optimistic about connecting with Hudson River Healthcare, a regional network of community health centers that is a primary source of health care for the Latino community and other residents who fall into the hard-to-count area.

“We’re meeting the community where they are,” said Vega-Matthews. “I want to be sure they realize this funding is their funding. If we want our fair share, we have to participate.”
She’s also recruited local college students to take part in the process, as Dutchess County is home to several colleges, including Vassar, Marist, Bard and Dutchess Community College.

A constitutional guarantee
The connection between a complete count and federal aid is the most frequently touched-upon talking point, but Vega-Matthews also points to history as it pertains to making sense of the census.

She carries with her a pocket copy of the U.S. Constitution, a reminder that the process of conducting a census every 10 years dates was spelled out in the Constitution when it was passed in 1787.
What it all comes down to with the census, Vega-Matthews said, is that, “if you believe in the law of the country, it’s our duty to participate.”