From left, NOVA Paramedics and Organizing Committee members Ethan Darbee and Matt Miller at the moment the vote crossed the majority threshold during the NLRB election. (Photo provided by Adam Pelletier.)
Central Region

By Editorial Staff on October 30, 2020 0 Comments
From left, NOVA Paramedics and Organizing Committee members Ethan Darbee and Matt Miller at the moment the vote crossed the majority threshold during the NLRB election. (Photo provided by Adam Pelletier.) 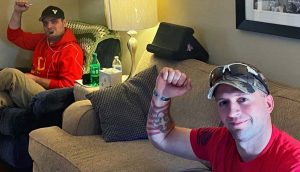 From left, NOVA Paramedics and Organizing Committee members Ethan Darbee and Matt Miller at the moment the vote crossed the majority threshold during the NLRB election. (Photo provided by Adam Pelletier.)

In the recent virtual count, the 24 workers opted to form a union with CSEA to have a greater voice in the workplace, fairness and respect. During the difficult campaign to organize a union in the midst of the COVID-19 pandemic, the employer had hired a union-busting firm, which cost the organization thousands of dollars in an unsuccessful attempt to suppress the voice of the workers.

“We wanted to join CSEA because we were looking for fair treatment and equality in the workplace, respect, and the right to earn decent pay for the vital work we do,” said Ethan Darbee, a NOVA paramedic. “We knew we needed more a more powerful voice in the workplace and a union was the only way we were going to get it.”

“It was an honor to work with such a great group of first responders who wanted to build worker power and improve working conditions not just within their own workplace but the field at large,” CSEA Statewide Organizer Adam Pelletier said. “When NOVA brought in union busters, the workers did not buckle. This is a momentous occasion and it is all because of the workers at NOVA!”

The NOVA victory is a landmark for CSEA; it is now the union’s flagship private sector local in the EMS field. While the NOVA workers are the first private-sector EMS employees to join CSEA, our parent union, AFSCME International, represents more than 26,000 other private-sector EMS workers.

When CSEA organizes EMS workers, the new union members will begin to close the pay and benefit gap they see when compared to other first responders like firefighters, nurses, and police. The Union’s newest members will now continue their fight for fairness, respect, and a first contract.

“We welcome our new brothers and sisters from NOVA into the CSEA family and we are ready to stand with them as they demand the respect they deserve,” said Central Region President Kenny Greenleaf.