The Town of Southold’s new boat was made by the same company that provides boats for the U.S. Coast Guard and U.S. Department of Homeland Security.
Long Island Region

By Wendi Bowie on December 17, 2020 0 Comments
The Town of Southold’s new boat was made by the same company that provides boats for the U.S. Coast Guard and U.S. Department of Homeland Security. 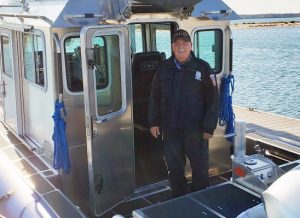 It is the passion for their work and dedication to town residents that prompted the bay constables to successfully seek grant money that saved the town more than $350,000.

The money was used to buy a new patrol boat for the bay constables, who had been using outdated boats from 1995.

“The boats we were using were older and were meant more for recreational purposes,” said Southold Bay Constable Joseph O’Leary. “We needed a new boat with state-of-the-art features that were developed for law enforcement use and could withstand seasonal changes.”

O’Leary knew there were several federal grants available to law enforcement agencies and did research to find the best one to satisfy the town’s needs. His efforts led him to a port security grant that had $100 million available.

O’Leary discovered that there were several other people in the town who applied for grant money, but were denied.

After giving it some thought, O’Leary realized that it was time to change tactics.

“I lobbied the chief of police to hire a professional grant writer,” said O’Leary. “Up until that point, the town had been filling out the paperwork for itself and submitting it.”

“I know from my time [in the U.S.]Coast Guard that you have to fill out the grant forms perfectly or they will be thrown out,” said O’Leary. “I approached the [Southold Police Department] chief about a grant writing company I found that had a 65 percent success rate and the chief agreed to use them.”

Whatever money the port security grant did not cover, the town provided the rest. With a boat that costs about $400,000, a grant of more than $350,000 is a tremendous savings. 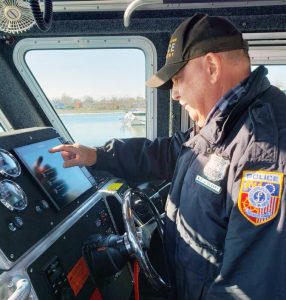 CSEA member and Town of Southold Bay Constable Joseph O’Leary works the wheel on the new boat that he played a major role in securing for the town.

Although the Southold bay constables requested two boats, they were only awarded one. That is still enough to make the three bay constables in the area happy because “one [boat]is better than none.”

It won’t take long for the new boat to be broken in. With about 100 miles of water to cover, the boat will get plenty of use.

O’Leary predicts that the new boat will be incredibly beneficial to the public because there will be faster rescue times in the case of marine incidents such as sinking boats and rescue missions due to physical injuries during water sports.

The new boat is not only faster, it has infrared detection, making it easier to see at night, as well as a special sonar that allows for vision at all angles around the boat. The older boats only allow rescuers to view from the back of the boat.

Although marine activity is at its peak during the summer, there is still a lot of water activity year round.
“We have commercial fisherman whose season begins in December and ends in March,” said O’Leary. “They depend on us during the winter if they have an emergency.”

Like everyone else, the peace officers were affected by the COVID-19 pandemic.

“When the pandemic hit, our summer residents from Nassau County and New York City, who could work remotely, came to the north fork [of Long Island],” said O’Leary. “When they got here, they wanted to start using their boats immediately.”

“Boating season usually starts in July, but this year it started in May,” said O’Leary. “We also had people from the city coming out here to fish. We were inundated with people. We had a lot to handle between recreational boaters and the fishermen.”

Still, the Southold bay constables have been able to handle their heavy workload exceptionally well. It just goes to show that CSEA members work is, and will continue to be, a major cog in the wheel that keeps our communities moving forward.