O’Gorman: ‘You have to take the risk’ 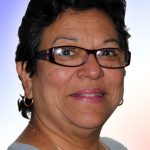 GARDEN CITY — Ana O’Gorman has been a force to be reckoned with since she first became a union activist almost a decade ago.

Now in her eighth year as CSEA Nassau Community College Unit President, O’Gorman is certain that women bring strength to the labor movement despite the hurdles before them.

“When I signed up to take the test to become a maintenance supervisor, I was immediately confronted and told that I was in the wrong place,” said O’Gorman.

Being Latinx and a woman, it only compounded the discriminatory behavior.

“If you become a supervisor, it’s even worse because [people]doubt your ability to lead,” said O’Gorman. “That doubt is compounded when you’re a Latino and your second language is English.” 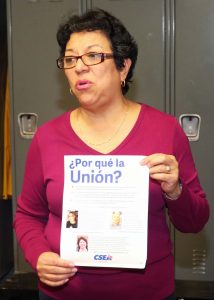 Nassau Community College Unit President Ana O’Gorman, who is bilingual, speaks with Eisenhower Park employees, many of whom speak Spanish as a first language.

Although not as overtly aggressive, O’Gorman has also faced dismissive behavior within CSEA’s ranks. When she initially decided to run for unit president, she was faced with condescending statements like, “I don’t want you to get depressed” and “I don’t want you to fail.” Men are rarely faced with these types of comments when they want to assume a leadership position.

Being the strong-willed woman that she is, O’Gorman simply reminds her detractors that if she was not afraid to leave El Salvador and immigrate to the United States, there is no need to be afraid to be a union leader. It’s a mindset that she passes on to other female activists and immigrants.

Although there are many women in leadership positions in CSEA, O’Gorman thinks there should be more. However, many women say that they don’t have the time due to professional and personal responsibilities. Sometimes, they are just afraid.

“I tell them ‘look at me, do I look afraid?’” said O’Gorman. “If you want changes in our union, and in life, you have to take the risk; there’s no time to be afraid.”

According to recent statistics, more than 40 percent of employed working mothers are the sole breadwinners in their home, which is why O’Gorman thinks a strong female presence in leadership is paramount.

“It’s really a matter of necessity,” said O’Gorman. “Other people decide that women don’t get equal pay, even though we are providing for our families, because we are not seated at the table.”