Trending
You are at:Home»Every Day Heroes»Worker’s quick thinking makes a difference for family 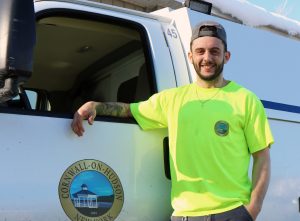 CORNWALL — Sometimes, being in the right place at the right time can make a life-changing difference, a difference that affirms the value of public workers in our communities.

That’s certainly true for CSEA member Anthony Gagliano, a member of our Village of Cornwall-on-Hudson Unit.

Gagliano, a laborer for the village’s Water Department, was out in a Town of Cornwall neighborhood reading water meters on a brisk day in mid-January when he saw something out of the ordinary.

Like many weekdays, the neighborhood was quiet and all but deserted, but on this day, there was one exception: a toddler running down the street, barefoot and clad only in a t-shirt and diaper, no parent in sight.

“I’d just parked, and as I was getting ready to get out of the vehicle, a small child came running up to me, crying,” said Gagliano. “As I opened the door, he nudged himself in between myself and the door, and just kind of latched onto my leg.”

With the temperature in the 30s that day, Gagliano knew the child was in immediate danger. Not only was the cold weather a threat, the homes in this neighborhood were only 100 yards or so from a busy, four-lane state highway.

“I was looking around for a parent or guardian, but nobody was there,” said Gagliano. “I picked him up and put him in my work vehicle with the heat running.”

After scanning the neighborhood, Gagliano knew it was time to notify police. After knocking on doors looking for the child’s family, officers transported the child down to the local police station. Authorities later determined the incident occurred due to a miscommunication between the child’s parents, and the family was later reunited.

“I was just doing what anyone would have done in that situation,” said Gagliano, a six-year village employee who is working toward earning his Grade D water treatment license.

The scary incident drives home the importance of public workers in their local communities. Like most of his co-workers, Gagliano grew up locally and knows both the village and the greater Town of Cornwall well. With the village and town increasingly becoming bedroom communities for New York City commuters, CSEA members there are valuable both on and off the job, with many involved in local volunteer organizations.

Going about their daily routines, Gagliano and his co-workers do the work that keeps the water flowing, something many don’t fully appreciate until something such as a water main break hits and CSEA members are out assisting with repairs, often on the coldest days of winter.

Helping a lost child didn’t seem like a big deal to Gagliano, but his boss, Water Superintendent Mike Trainor, pointed out that it made a world of difference to a local family.

“My son said to me, after this happened, ‘Just by Anthony waking up and coming to work that day, he had a positive impact on someone’s life,’” Trainor said. “Had he not been there, there could have been a very different outcome.”