Trending
You are at:Home»Retirees»After union members step up, county backs away from retiree health changes

After union members step up, county backs away from retiree health changes

NEW CITY — After CSEA retiree and active members in Rockland County spoke out against county officials’ planned changes to its retiree health insurance plan, the county has backed away from the changes.

“Thank you to all of the legislators who stood up both for our retirees and our current members who hope to retire from county service,” Riccaldo said. “Our retirees invested decades of their lives serving the people of our county knowing that their salaries weren’t lucrative, but that their health care benefits could not be diminished in retirement. Our work with legislators these past few weeks demonstrates how collaboration benefits not just our workers and retirees, but the entire county.”

A bipartisan group of county legislators and their staff worked with us to halt County Executive Ed Day’s attempt to abruptly switch county retirees’ health insurance coverage from NYSHIP to Aetna. Following media coverage questioning Aetna’s claims approval process, Day announced that he is backing away from this plan.

In addition to violating a county law protecting county workers’ health insurance in retirement, the plan was expected to force Medicare-eligible retirees from a traditional Medicare plan under NYSHIP to a privatized Medicare Advantage plan that excluded certain local providers and hospitals. 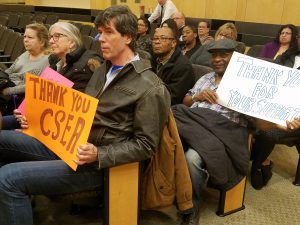 Retirees said the effort to stop the switch to Aetna was not a political issue, but a matter of keeping a commitment to the men and women who worked in county service at the time in their lives when they need consistent, quality health care coverage the most.

One remaining concern is clarification over the language used in the county’s letter rescinding its withdrawal from NYSHIP. With the letter stating that the county won’t be withdrawing from NYSHIP for the “foreseeable future,” retirees said they want Day to make a clearer commitment on this issue.