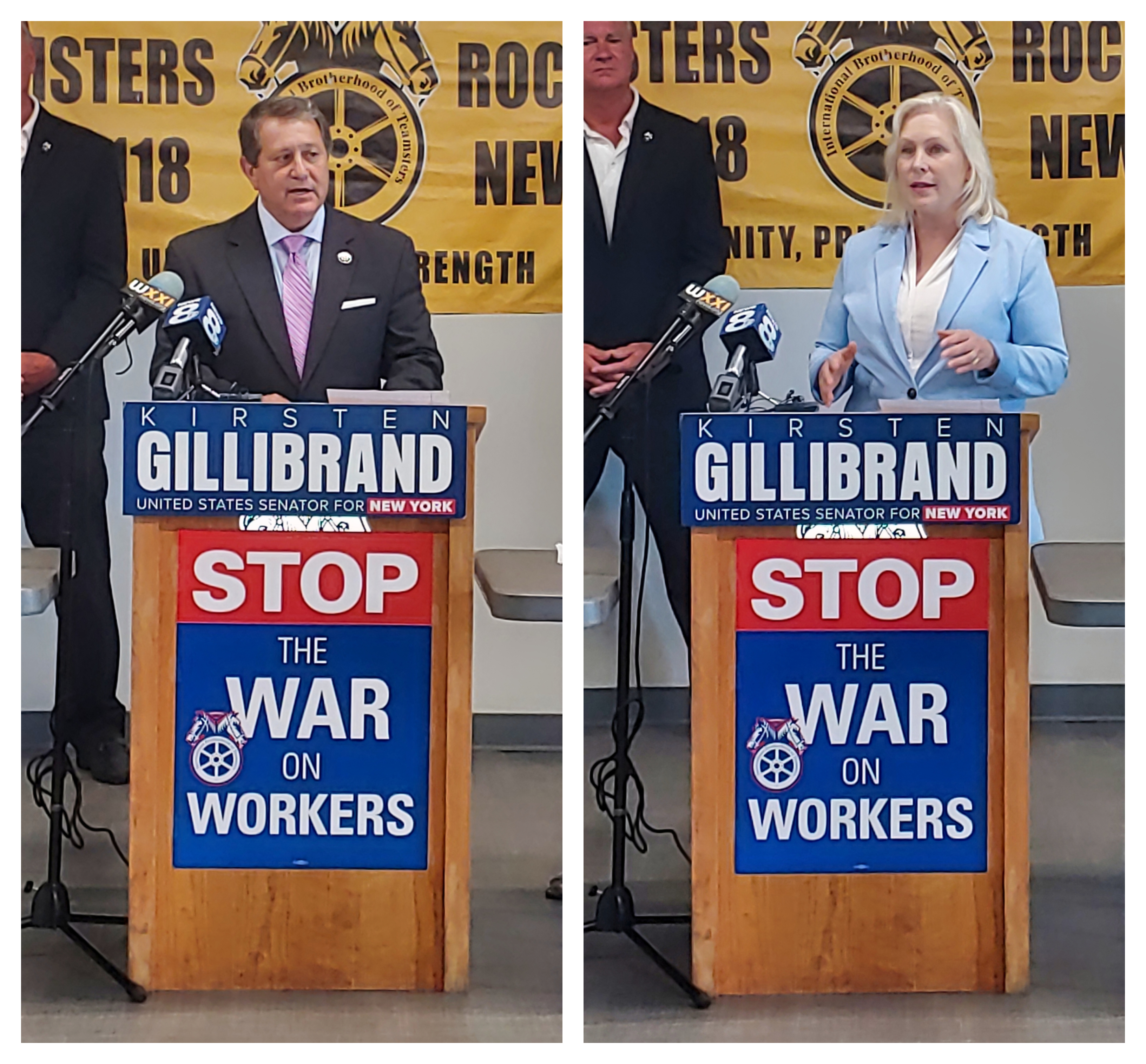 Rochester – Union leaders and federal lawmakers from New York State gathered today at the Teamsters Union Hall in Rochester to push for US Senate passage of the PRO Act.

The Protecting the Right to Organize Act, or PRO Act, is a bill that would amend previous labor laws and is designed to expand various labor protections related to employee rights and to organize and collective bargain in the workplace.

Union leaders at the press conference today say the Protecting the Right to Organize Act — PRO Act — would finally begin to level a playing field they say is unfairly tilted toward big business and management, making union organizing drives and elections unreasonably difficult.

“The PRO Act would protect and empower workers to exercise our freedom to organize and bargain,” US Senator Gillibrand.

“In this time of economic uncertainty, we must reaffirm our commitment to supporting every American worker,” said Rep. Morelle. “That means empowering workers with the fundamental right to organize and make their voices heard. As the son and husband of life-long union members, I know just how critical these rights are to providing a sense of safety and security to working families, and I’m proud to support them by passing the PRO Act.”

Richard Trumka, the president of the AFL-CIO, says, “It’s a game changer. If you really want to correct inequality in this country — wages and wealth inequality, opportunity and inequality of power — passing the PRO Act is absolutely essential to doing that.”

Meanwhile the US Chamber of Commerce and big business groups are lined up against the measure.

Here are five provisions in the PRO Act:

ONE: So-called right-to-work laws in more than two dozen states allow workers in union-represented workplaces to opt out of the union, and not pay union dues. At the same time, such workers are still covered under the wage and benefits provisions of the union contract. The PRO Act would allow unions to override such laws and collect dues from those who opt out, in order to cover the cost of collective bargaining and administration of the contract.

TWO: Employer interference and influence in union elections would be forbidden. Company-sponsored meetings — with mandatory attendance — are often used to lobby against a union organizing drive. Such meetings would be illegal. Additionally, employees would be able to cast a ballot in union organizing elections at a location away from company property.

THREE: Often, even successful union organizing drives fail to result in an agreement on a first contract between labor and management. The PRO Act would remedy that by allowing newly certified unions to seek arbitration and mediation to settle such impasses in negotiations.

FOUR: The law would prevent an employer from using its employee’s immigration status against them when determining the terms of their employment.

FIVE: It would establish monetary penalties for companies and executives that violate workers’ rights. Corporate directors and other officers of the company could also be held liable.