Herkimer County 911 dispatchers Brandan Parks, Amy Jacobs and Matthew Drake stand together in solidarity after working with unit leaders and union staff on negotiating a Memorandum of Agreement to raise their base pay and shift differentials.
Central Region

By Nicholas Newcomb on August 27, 2021 0 Comments
Herkimer County 911 dispatchers Brandan Parks, Amy Jacobs and Matthew Drake stand together in solidarity after working with unit leaders and union staff on negotiating a Memorandum of Agreement to raise their base pay and shift differentials.

HERKIMER — CSEA members employed as 911 dispatchers in Herkimer County often make split-second decisions on how to respond to an emergency, often while understaffed.

Yet, the dispatchers have been among the lowest paid in the surrounding area, despite covering such a geographically large county — and half of a neighboring one.

Thanks to action taken through our union, 911 dispatchers now have taken a major step toward improving their pay.

Over the years, Herkimer County 911 dispatchers have fought to improve their pay. Working long shifts, weekends, nights, holidays — and through a global pandemic with poor staffing levels, CSEA members at the dispatch center decided it was once again time to take action. 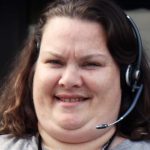 “We had tried previously putting a request in for additional money on our base pay and basically got a letter back saying, ‘thank you, but not at this time,’” said Amy Jacobs, a CSEA member and Herkimer County 911 dispatcher.

Jacobs, a dispatcher for more than 20 years, explained just how much the job has changed and how much more work the department has taken on, such as answering for more agencies, taking on new alarm boxes, and answering COVID-19 related Health Department calls overnight.

“It seemed to be for us, and still does, with the ever-changing population and technology that we always take on more work and never get extra pay for it,” she said.

With all the additional work — and dealing with the pandemic for more than a year — Jacobs and her
co-workers took collective action to get an increase in pay ahead of their upcoming contract negotiations.

“For [the dispatchers], it was necessary that they do something to get some more funding and make the job a little more lucrative to get more people [interested in applying for the job and staying],” Giaquinto said.

Showing the effectiveness of union action, the workers reached an agreement with county officials to boost their pay ahead of contract negotiations.

“The county [officials]didn’t really have to deal with us, but they did,” Jacobs said. “They weren’t going to do anything crazy with negotiations coming up. At least we’re starting a few thousand dollars ahead of where we would be starting from come negotiation time.”

“We’re the first people that hear what’s going on,” Jacobs said. “In a split second, you have to decipher the situation. Who needs to respond? How many need to respond? How do we make sure everyone gets home to their families?”

Processing all of that information, all while remaining calm, can be difficult. After more than 20 years on the job, it’s second nature to Jacobs.

“People out there need to know that we feel. It may not sound like it because we sound very point-driven,” Jacobs said. “But the emotion after a certain call, those are things we have to take home with us. It takes a toll on you after a time … the fear in their voice has to become the calm in our voice.”

Jacobs noted part of the reason dispatchers are underpaid is because legislative bodies don’t fully understand the scope of their job. She said that their position is often lumped into a ’secretarial’ category. However, being a dispatcher means frequently making life-saving decisions in a split second.

“When the phone rings at 2 a.m. and it’s someone crying that their child isn’t breathing on the other end, we have the training to walk a parent through CPR for their child to get them the help they need,” Jacobs said.

“In a serious motor vehicle accident, (we are) able to get a helicopter, get law enforcement, and EMS to a scene, and (we are) able to do it all in a split-second. I wish legislators could see truly what it is we do.”

Legislation to classify 911 dispatchers under the “first responder” category, supported by CSEA, has passed through both houses at the state level and is being sent to the governor’s office. Jacobs argues that this would be a huge step for dispatchers moving forward.