Trending
You are at:Home»Annual Delegates Meeting»Gamache honored for efforts to give co-workers a voice at work 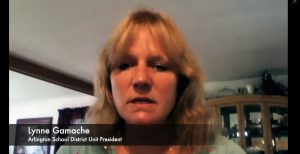 POUGHKEEPSIE — While our union often looks to organize non-union worksites, sometimes there are organizing opportunities close to home.

That’s what Lynne Gamache, former Arlington School District Unit president, realized when she spoke with security guards in her district.

Gamache is the 2021 recipient of the Nadra Floyd Award, which is presented each year at our union’s Annual Delegates Meeting to an existing CSEA activist who helps move our union’s organizing efforts forward.

District security guards reached out to Gamache during the COVID-19 pandemic after struggling with the financial impact of reduced or inconsistent work hours.

With other workers having collective bargaining agreements in place, the security guards noticed things were going more smoothly for unionized workers.

“The security guards were the only people in the district who aren’t in a union, and they had no rights,” said Gamache.

Gamache arranged for the security guards to meet with CSEA Labor Relations Specialist Doug Morrison and Statewide Organizer Adam Pelletier. Along the way, she continued to work with CSEA staff to move the campaign forward.

The campaign is still in progress, but Gamache’s efforts have been key in helping secure a voice for these workers.

“The pandemic showed how things can change in the blink of an eye,” said Gamache. “We have contracts that protect us and our jobs, but there were other workers in our school buildings who didn’t have the same. They didn’t have a seat at the table like we do as union members.”

While Gamache has volunteered on previous member engagement blitzes, this was her first time being involved in an organizing campaign.

She urged CSEA members to take note of where there might be opportunities for organizing within their worksites and communities.

“Be aware of what’s going on in your worksite,” said Gamache. “It’s easy to take for granted what we have. These workers deserve to be protected, too, and we should use the power we have as union workers to help our co-workers get the same voice on the job.”