Trending
You are at:Home»COVID-19»Accessible COVID testing a bridge to union building 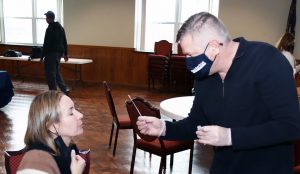 GLEN COVE — As the Omicron variant of COVID-19 continues to impact our communities, it is critical that everyone be aware of their current health status.

Recognizing this, CSEA Long Island Region President Jerry Laricchiuta, the CSEA City of Glen Cove Unit and Long Island Region Director Miguel Cruz arranged for free COVID testing for CSEA members living and working in Glen Cove, as well as other first responders and their families in the city. 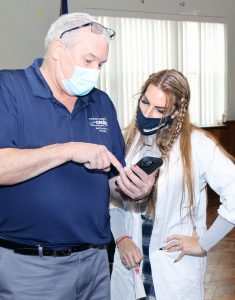 CSEA Long Island Region President Jerry Laricchiuta shows a participating medical provider from Bridge Back to Life Center an article about the increase in COVID-19 cases on Long Island.

Approximately 120 CSEA members and other first responders were tested during the six-hour event.
As if it were kismet, the day came together with ease.

Laricchiuta and Cruz did their part by getting physicians from the Bridge Back to Life Center to administer the COVID -19 tests.

CSEA City of Glen Cove Unit President Ralph Comitino decided to make COVID-19 testing a priority because of members’ experiences outside of the unit’s organized event.

“One of our members went somewhere to be tested and she waited in line for four hours,” said Comitino. “A different member couldn’t find any testing at all.”

The convenience of offering COVID testing locally was another motivator behind making the event happen.

“I would love to be able to arrange testing all over Long Island, but it’s not easy to get an accessible area for the membership,” said Laricchiuta. “Thanks to the Glen Cove Fire Department, we had a space for members in that area. At CSEA, we’re always thinking about this organization and what we can do for the membership.”

Those efforts are being noticed by unit members.

Every person that came in to be tested commented on how wonderful it was for CSEA to arrange the event for them. 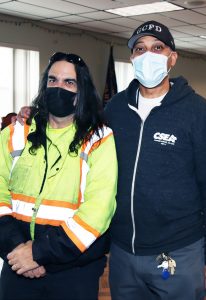 Union building
Offering COVID-19 testing was another way for the City of Glen Cove Unit officers to engage members.
Going two years without a contract, as well as experiencing layoffs in the unit, had left some members feeling disillusioned.

“I ran for office because I knew that I could turn this unit around,” said Comitino. “I’ve been working in Glen Cove since 2008 so a lot of people know me.”

It did not take long for Comitino to establish a negotiating committee to meet with the city mayor about the unit’s new contract.

Within weeks, not only did the unit have a new contract, Comitino negotiated to have two members rehired who had previously been laid off. A third member who was laid off had found a new job outside city employment.

Unit officers also made sure that positions that had been vacated due to retirements were filled.

All the while, Comitino made sure unit members understood that the success of CSEA is in their hands.
“I told them that if they want to know more about CSEA, they need to get involved,” said Comitino. “I informed them about the online classes, which allow members to train to be a shop steward or grievance officer.”

Member response was overwhelming, and the unit has not had its current level of participation in quite some time.

Unit members were working with city officials to establish salary adjustments and grade changes, as this edition went to press.

“It’s only been six months and with the surge in member participation, this unit has completely turned around,” said Comitino.