Trending
You are at:Home»CSEA Regions»Capital Region»Union helps win back job for member fired for ‘being a woman’

Antonia Triumpho is shown outside of her workplace after her shift.
Capital Region

By Therese Assalian on June 30, 2022 0 Comments
Antonia Triumpho is shown outside of her workplace after her shift. 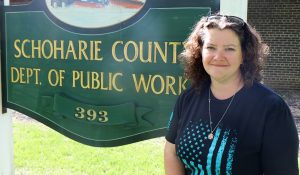 Antonia Triumpho is shown outside of her workplace after her shift.

SCHOHARIE — Antonia Triumpho was harassed, disrespected and then fired without notice.

The reason? Being a woman.

Such was the findings of two state courts after nearly four years of legal wrangling.

Today, Triumpho is back at work due to CSEA’s efforts.

Over nearly a year before her termination, she faced numerous instances of humiliation by male co-workers over her gender.

As noted in court papers, some of Triumpho’s co-workers had made jokes to her in reference to female body parts and women’s health issues. A foreman had also held a paddle used for directing traffic and asked her if she ‘wanted a spanking.’

For public works employees who work on or near roadways, restrooms are not always widely available at job sites.

One day, Triumpho asked the foreman for permission to use a nearby restroom during a shift.

The foreman ignored her request and along with two male co-workers, mocked Triumpho. The foreman also deemed these breaks as “beginning to be a bad habit.”

Some days, Triumpho would eat lunch alone in her car to escape badgering from co-workers.

Despite facing disrespect, Triumpho received positive reviews about her performance and work ethic. In late 2017, Triumpho expressed concern to a supervisor about the foreman’s treatment of her.

The supervisor told her to “brush it off,” noting, “That’s just how [he]is.”

In early April 2018 and without any advance notice, Triumpho was told by county DPW Commissioner Daniel Crandell and the supervisor she was being terminated for “not being a good fit.”

“I was in total shock,” Triumpho said. “I will never forget that day.”

When managers were later asked in court as to why Triumpho was fired following good reviews and with a reputation of a strong work ethic, they criticized her attitude, calling her “difficult,” “argumentative” and a “nag.”

While employed, a co-worker had encouraged Triumpho to become a CSEA member and she joined our union.

“When I started, I didn’t even know what a union was,” she said. “I never worked in a union workplace.”

Her union membership became key to Triumpho fighting back against her termination.

CSEA Senior Counsel Jennifer Zegarelli, left, and Antonia Triumpho speak with each other.

Soon after being fired, Triumpho was contacted by a local CSEA officer, who encouraged her to reach out to CSEA’s in-house Legal Department. She met with a CSEA attorney and the process of seeking justice began.

Triumpho worked closely with CSEA Senior Counsel Jennifer Zegarelli to build a case against the county. CSEA filed suit against the county for wrongful termination based on gender, a violation of the state’s Human Rights Law.

As months turned to years, Triumpho and Zegarelli formed a close bond.

“From our first meeting in 2018, I knew that Antonia was wronged but I also realized that this case would be extremely challenging as an employer can lawfully terminate a probationary employee for any number of reasons,” Zegarelli said. “Just as she is a hardworking woman who brings a positive attitude to her work, I found Antonia to bring the same determination to our case. Besides enduring four years of litigation, the legal process was also very emotional and stressful for Antonia. I am so pleased that justice was served for Antonia and that we were able to get her job back for her and her family.”

“Jennifer is awesome,” said Triumpho. “She was always in touch.”

Schoharie County defended the termination in court, hiring a private law firm for the case. The county argued that the termination was justified because she was a probationary employee.

The case first went to a bench trial, and the court ruled in favor of Triumpho and CSEA. The county appealed the decision.

A state appellate court upheld the lower court’s decision. Although probationary terminations are difficult to challenge, two courts have now ruled that CSEA had proven the case — Triumpho was terminated on the basis of gender.

The county was ordered to return Triumpho to her job and pay her nearly four years of back pay. She returned to work in February and collected her back pay in May.

“In this Court’s view, based upon the evidence presented, Mr. Crandell’s declaration that she was not “a good fit” can only be construed as not a good fit because she is a woman [emphasis in original]. The credible evidence is overwhelming that her job performance was satisfactory.”

Things are now going well for Triumpho, who said that she likes her job and the workplace climate has improved due to the departure of some managers. She is considering getting her CDL, volunteers with the local fire department, is developing an interest in workplace safety and is excited for the future.

“I am very thankful for CSEA’s help and to all those who worked so hard to help me,” Triumpho said. “If I hadn’t signed the union card, I would have been all alone in this.”