JoAnn Ganc, an account clerk at the City of Troy’s Office of the Treasurer, at her office.
Capital Region

By Therese Assalian on August 31, 2022 0 Comments
JoAnn Ganc, an account clerk at the City of Troy’s Office of the Treasurer, at her office. 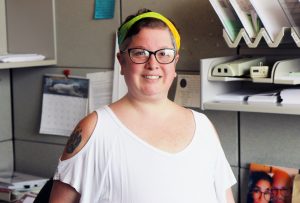 JoAnn Ganc, an account clerk at the City of Troy’s Office of the Treasurer, at her office.

WATERVILET — A local teenager survived a close call with choking earlier this year, thanks to the quick actions of City of Troy Unit member JoAnn Ganc.

Ganc, an account clerk at the city’s Office of the Treasurer, was attending her son’s track meet on a spring evening. She was watching the meet in what she described as a ‘busy and noisy’ environment.

Suddenly, one of her son’s teammates, who happened to be standing next to Ganc, began striking her in the arm.

She turned to notice the boy clutching his throat. When Ganc asked whether he was choking, he nodded.

Ganc swung around him, wrapped her hands under his diaphragm and pushed. A plastic bottle cap flew out of his mouth.

“It was all instinct,” said Ganc, who, despite having no formal training in the Heimlich maneuver, seemed to know exactly how to help the struggling teen.

“Afterwards, I was kind of in shock, I didn’t even remember everything,”said Ganc. “I told the coaches. They checked him out and he was fine.”

Since then, a few silver linings have come from the near tragedy.

Ganc said she has become friendly with the boy and his family, whose parents had left the meet just before the incident.

Also, her son, a rising senior at Lansingburgh High School, has since become certified in AED, First Aid and CPR through the American Red Cross.

While not interested in attention over her efforts, she is very proud of her son.

“I think my actions that night inspired him,” said Ganc.