Michael Kuffo poses next to a mural he painted at the request of a school principal who wanted to highlight a quote from her favorite children’s book, “Only One You,” by Linda Kranz.
Long Island Region

By Wendi Bowie on August 31, 2022 0 Comments
Michael Kuffo poses next to a mural he painted at the request of a school principal who wanted to highlight a quote from her favorite children’s book, “Only One You,” by Linda Kranz. 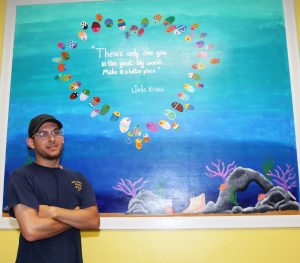 Michael Kuffo poses next to a mural he painted at the request of a school principal who wanted to highlight a quote from her favorite children’s book, “Only One You,” by Linda Kranz.

Kuffo is using his artistry talent to paint elaborate murals across the school district.

It all began at Forrest Elementary School when a school nurse was struggling to paint a picture of a snowman on her window.

Kuffo overheard the nurse’s frustration. He then told her that he is an artist and offered his help, which she accepted.

By the next morning, Kuffo had completed the painting. The school nurse was amazed. She showed Kuffo’s work to school staff, including the school principal, who quickly asked Kuffo to paint something for the school that would be more permanent.

Kuffo then began the project of a 40-foot mural, which he completed in four days. The schoolchildren, teachers and parents all loved it.

Inspired by how well his work was received and not wanting other district schoolchildren to be left out, Kuffo began approaching staff in other district schools to see if they would be interested in a mural at their school. His work can now be seen in all five elementary schools and the junior high school in the West Babylon School District. 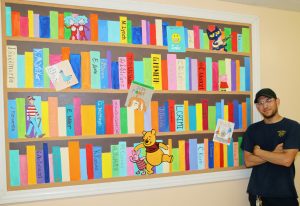 Michael Kuffo shows off a book mural at Santapogue Elementary School, which features the names of the school’s teachers and book characters.

Kuffo’s murals are personalized to fit that particular school. For instance, a mural at Santapogue Elementary School has the names of the school’s teachers painted on images of book sleeves. A mural at Forrest Elementary showcases the many nationalities and languages of the schoolchildren.

A true labor of love, Kuffo volunteers his personal time to complete the projects.

“I grew up in this area, so it’s really important to me to give back to the community,” said Kuffo. “It’s not possible to paint a picture for every child in the district, but I can paint murals in the schools that all of them can enjoy. That is my gift to the children.”

Through his art, Kuffo has established great relationships with West Babylon School District children, who often come up to him to tell him their favorite part of one of his murals.

“They’re always amazed when they see one of my new paintings,” said Kuffo. “As I walk through the halls, I’m always saying ‘hi’ and giving high fives.”

Stories about Kuffo’s school murals have been featured on various media outlets, which has made him a bit of a local celebrity. West Babylon School District parents occasionally recognize Kuffo while he is working in different schools. At a recent school art show, one set of parents asked him for his picture because they are sure that he is going to be famous.

Extending his talents outside of West Babylon, Kuffo does commissioned drawings that can be seen in firehouses and police departments across the United States, Ireland and Germany. That opportunity presented itself when Kuffo’s work was spotted on his Instagram account.

“People began sending me pictures and asking if I could duplicate the picture in a drawing,” said Kuffo.

Even with all of the accolades he has received for his art, Kuffo has never lost sight of why he began painting murals in the schools.

“There are so many bad things happening in the world right now,” said Kuffo. “My hope is to show the kids that there is still some good left and to inspire them to do good things for others.”