In this 2005 file photo, Gerald McEntee speaks during a CSEA rally in Buffalo to support Erie County employees who were fighting to maintain public services in the county amid fiscal struggles and anti-labor county managment. The rally was part of our union’s 95th Annual Delegates Meeting, which was held in Buffalo.
Statewide

By Editorial Staff on August 31, 2022 0 Comments
In this 2005 file photo, Gerald McEntee speaks during a CSEA rally in Buffalo to support Erie County employees who were fighting to maintain public services in the county amid fiscal struggles and anti-labor county managment. The rally was part of our union’s 95th Annual Delegates Meeting, which was held in Buffalo. 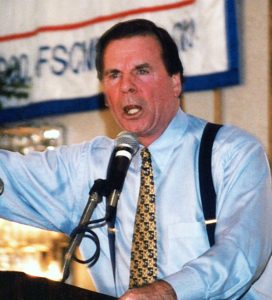 Gerald McEntee speaks at a CSEA event, circa 2005.

CSEA is mourning the loss of former AFSCME International President Gerald “Jerry” McEntee, who passed away July 10 at his home in Naples, Fla. He was 87.

As an influential force in the national labor movement, McEntee fought tirelessly to defend and advance public employees and services, even going “toe to toe with U.S. presidents,” as noted in AFSCME’s obituary.

“I’ve known Jerry for many years and always admired his passion for doing whatever was necessary to improve the lives of working people,” said CSEA President Mary E. Sullivan. “He devoted his life to the fight for those who make our country work. He was a respected leader across America, and brought AFSCME, as well as the AFL-CIO, to new heights. He is very near and dear to the hearts of our union members.

“AFSCME, the labor movement and the nation have lost a legend with ‘the heart of a lion,’ as President Bill Clinton described him,” said AFSCME International President Lee Saunders. “Jerry McEntee was a visionary leader and one of the most fearless, ferocious advocates working people have ever had. Standing up for people who strengthen their communities through public service was his passion and his life’s work. From the moment he became an AFSCME member 66 years ago, he has never let up in the fight.”

McEntee was a Philadelphia native whose father, William J. McEntee, was a sanitation truck driver and union organizer. He followed in his father’s union footsteps when he joined AFSCME’s District Council 33, representing Philadelphia municipal workers.

During his tenure, McEntee helped strengthen AFSCME into a force for political action, giving workers a voice on every level of government in the country.

He led efforts to secure and preserve federal funding for public services that CSEA and other AFSCME members provide, and helped lead AFSCME’s support for numerous pieces of legislation that improved workers’ lives, including the Family and Medical Leave Act, minimum wage increases, the Americans with Disabilities Act, the Civil Rights Act of 1991, the Lilly Ledbetter Fair Pay Act, the American Recovery and Reinvestment Act and the Affordable Care Act. McEntee also played a key role in AFSCME’s successful effort to block a proposal to privatize Social Security.

“Jerry was a uniting force, who had a great sense of humor and a sound legislative perspective, which took our union very far as a result,” said Fran Turner, Director of CSEA’s Legislative and Political Action Department.

McEntee was also known for his work in fighting discrimination, including advancing pay equity and protesting apartheid in South Africa.

In this 2005 file photo, Gerald McEntee speaks during a CSEA rally in Buffalo to support Erie County employees who were fighting to maintain public services in the county amid fiscal struggles and anti-labor county managment. The rally was part of our union’s 95th Annual Delegates Meeting, which was held in Buffalo.

As CSEA and AFSCME discussed affiliation during the 1970s, McEntee was a strong supporter of our union, as well as CSEA affiliating with AFSCME.

McEntee frequently attended CSEA Annual Delegates Meetings and AFSCME Lobby Day events in Albany, and he was known for his rousing addresses to CSEA and other AFSCME members.

Former CSEA President Joe McDermott, who led our union from 1988-1994, had a long-term working relationship with McEntee that went back to CSEA’s 1978 affiliation with AFSCME.

“Jerry and I developed a personal friendship long before he became ASFCME International President,” said McDermott. “I was saddened by his health decline and subsequent passing. We first met at the AFSCME International Convention the year of our affiliation, when I was [CSEA’s Capital] Region 4 President, and Jerry was the AFSCME Council 13 director. His first attendance at a CSEA function was as my guest speaker at a Region 4 conference. He had a wonderful ability as a public speaker and was a great asset to the labor movement. I believed he was the perfect choice to succeed Jerry Wurf [as AFSCME International President]and become an effective AFSCME president. CSEA became one of his biggest supporters.”

“Jerry McEntee was one of the clearest and loudest voices for working men and women’s rights throughout the country,” said Donohue.