Trending
You are at:Home»PRIDE»Pride at Work: CSEA celebrates 50 years of Rochester Pride

CSEA Western Region members gather around a Monroe County Local banner as they prepare to march in the Rochester Pride Parade.
PRIDE

By Madison Ruffo on August 31, 2022 0 Comments
CSEA Western Region members gather around a Monroe County Local banner as they prepare to march in the Rochester Pride Parade.

ROCHESTER — On a Saturday in July, CSEA Western Region members and dozens of other labor activists gathered around a “3” spray-painted down Park Avenue in the city’s downtown as they prepared to march in the Rochester Pride Parade.

As our union members marched, sporting white T-shirts with rainbow “CSEA Pride” printed on the front, they were greeted with echoing cheers, high fives and strong union support from onlookers.

Call-and-response chants erupted from union members marching in the parade. Many of the labor union members were marching behind the banner for the AFL-CIO constituency group Pride at Work, which advocates for the rights of LGBTQ+ members on and off the job. 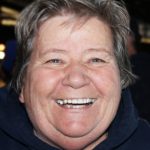 “Pride at Work and CSEA were instrumental in getting marriage equality in New York,” said Watts, a 23-year CSEA member and Monroe County Local activist who had served as the local president before retiring. 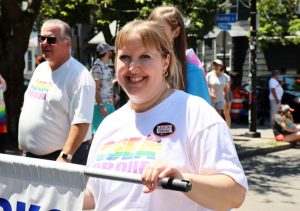 In addition to her union activism, Watts has been one of the coordinators of the Rochester Pride Parade for the last 10 years. As a very actively involved member of the LGBTQ+ community in Rochester, she gets asked annually why Rochester’s Pride festivities are in July when Pride Month is celebrated in June.

In July 1972, Rochester held the first Pride picnic at Genesee Valley Park, where the picnic is still held. The first Pride picnic was held three years after the Stonewall Riots, a series of protests in June 1969 following a police raid of a predominantly gay bar in New York City. 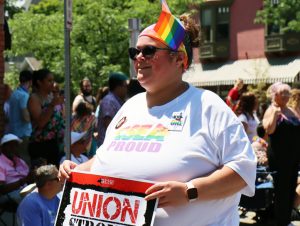 The riots, which lasted for six days, became known as a catalyst event for the LGBTQ+ liberation movement – and the observance of Pride Month in June. Every year since the protests, events are held in New York City to remember Stonewall that draw LGBTQ+ community members and allies from across the country, including from Rochester.

Because members and allies of Rochester’s LGBTQ+ community attend the New York City events in June, Rochester community members opted to hold their own celebrations in July.

At first, the Rochester community only held the Pride picnic, which, at its peak, attracted thousands of attendees. In 1989, the 20-year anniversary of the Stonewall Riots, the Rochester Pride Parade was born. 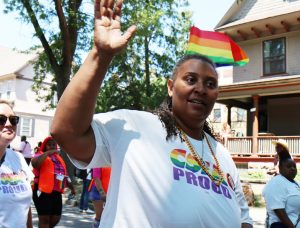 Industry Local activist Michelle Harris waves to onlookers as she marches along the parade route.

While every year’s festivities draw a large crowd, there was something special about this year. July 16 – the day of this year’s parade – marked exactly 50 years since the first official Rochester Pride picnic, which established the ever-strengthening presence of the LGBTQ+ rights movement in the city.

It also was Watts’ final year coordinating the parade. While noting that it’s bittersweet, she feels that she truly accomplished what she stepped up to do.

“I wanted to be the voice for the people who are afraid to speak up because the fear of rejection is a powerful oppressor,” said Watts. “With the Monroe County [CSEA] contract getting [LGBTQ] inclusive language, I feel like I’ve come full circle.” 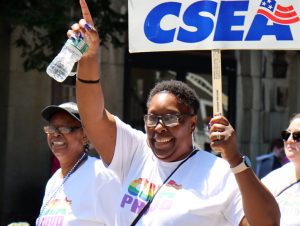 Minutes before this year’s parade began, Watts stood in the center of Park Avenue, joined by other parade organizers, and took the megaphone.

“Happy Pride, everyone!” shouted Watts to the crowd.

She promised that next year, she’ll still be there, right along the route in her lawn chair with her wife by her side, cheering on a community that lives so deeply in her heart. 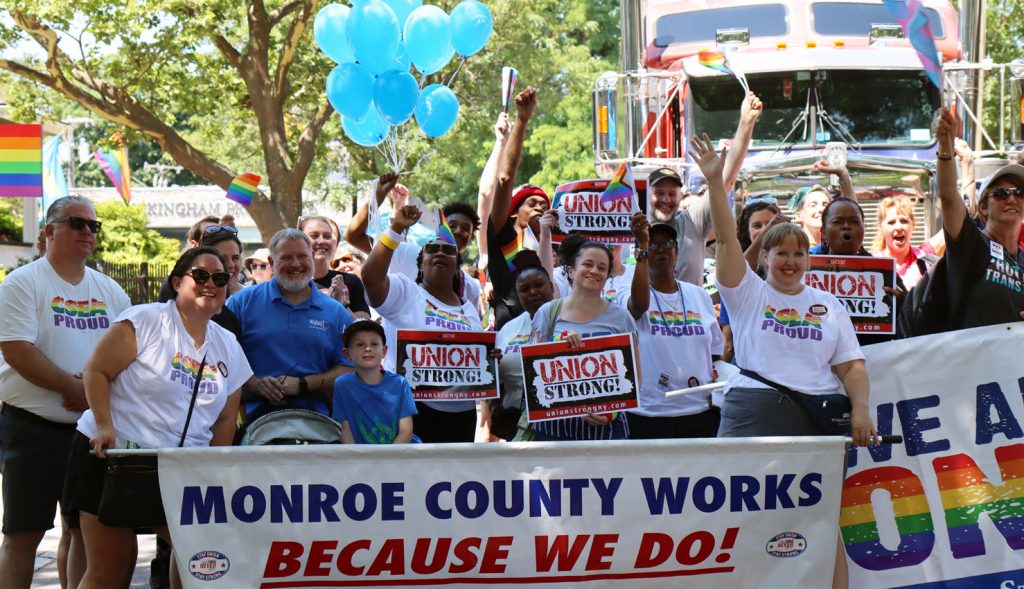 CSEA Western Region members gather around a Monroe County Local banner as they prepare to march in the Rochester Pride Parade.