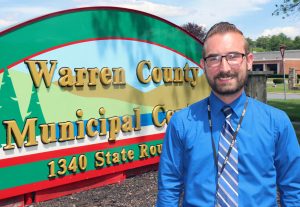 His research and tenacity, along with using our union’s many member resources and involving CSEA members in advocating for a solution, recently led to a major victory for county through across-the-board wage increases that will help improve worker recruitment and retention.

Connell, a social welfare examiner at the county’s Department of Social Services who has been unit president since 2020, kept his eyes on county Board of Supervisors meeting minutes and noticed some information that spurred him to take action.

He not only noticed a high number of resignations, but other information that meshed with what he and his co-workers were experiencing – high turnover, low morale, overtime needed to cover the work and the stark reality that the county was not attracting new employees.

‘We are getting angry’

In November 2021, Connell worked with CSEA Labor Relations Specialist Diane Selchick to craft a letter to the county’s Board of Supervisors chair that detailed workers’ concerns and asked the board to address the issues.

County officials did not respond.

In March, Connell wrote a letter to county officials again expressing concerns about low morale and issues confronting workers when vacancies go unfilled, including understaffing. He shared the information he tallied from the board meeting minutes – 67 workers had resigned in the prior 12 months.

That letter, too, was ignored.

“At this point, we are getting angry,” said Connell, who also scoured other labor contracts provided by CSEA. His research proved his suspicions – Warren County workers were being paid less than those in similar titles throughout the area surrounding the county.

In early June, an opportunity arose to push the issue. The county, which normally holds board meetings during the day, scheduled a meeting the evening of June 15; a once-a-year opportunity that had to be seized.

“There was not a lot of time to organize,” said Connell, who worked with officers to get members out. Members also got support from CSEA Capital Region President Ron Briggs.

“I was concerned we might not have enough people show and I knew we needed a strong showing to have any chance of getting this done,” said Connell. “I spoke with Ron about it and he was very encouraging and said he wanted to come.”

On the night of the meeting, 100 members, clad in purple for solidarity and in recognition of Elder Abuse Awareness, swarmed the meeting room, pushing the capacity limits.

Michael Biele, a social welfare examiner, discussed systemic issues that threaten “Warren County from being able to serve our constituents to the best of our ability,” including how understaffing may jeopardize essential county services, including food programs.

Connell asked board members to balance their stated concerns over taxpayer burden with any number of serious burdens residents suffer when vital services are negatively impacted.

Linda Morgan, who works in the Department of Social Services’ Fraud Unit, spoke out from what she noted was a ‘sense of responsibility.’ She shared wrenching stories of how understaffing impacts her co-workers, including a mother forced to work two additional jobs to make ends meet while her kids are left home alone.

She added that despite the turnover, many Social Services staff members stay with the county because they care about the clients.

“We have six trucks and eight people,” said Jessica Barton, a Department of Public Works employee. “We can’t do double shifts. What do you want us to do?”

Briggs took the board to task for stall tactics that he equated with a ‘shell game.’

Before the meeting, Briggs had asked workers to say in one word how they feel about their jobs.

Briggs said that any perceived obstacles for an agreement did not exist on the labor side.

“It felt really cool,” said Connell, recalling the meeting. “It was a show of unity I hadn’t seen before. I’ll forever remember it.”

At Briggs’ suggestion, instead of waiting for the county to act, members drafted a memorandum of agreement (MOA) and presented it to county officials.

Within two weeks of the board meeting, our union and the county sat down and negotiated the terms. The outcome – an across the board wage increase of $2.75 per hour for all bargaining unit members.

Connell extends credit to local and unit officers, CSEA staff and members who supported their efforts. He also credited county officials for being a ‘good negotiating partner,’ and feels this victory will pay dividends for the employer, employees and county residents.

“I hope it will improve the workplace,” said Connell. “A lot of people are burdened with short-staffing. Someone has to pick up that slack and that’s us. We’ve been doing it all along with no disruptions to county services.”