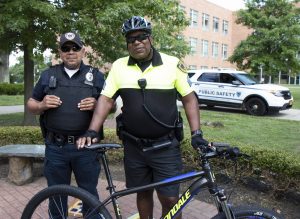 From left to right, Officer Harry Vializ and Sgt. Carl Jenkins, shown here patrolling the Rockland Community College campus, are credited with using Narcan to save the life of an individual.

SUFFERN — The public safety officers at Rockland Community College are here to help.

Most days, that consists of patrolling the 175-acre suburban college assisting students, responding to routine medical calls and providing a positive presence that allows everyone on campus to feel safe.

However, the officers are also trained to deal with more serious medical situations, and their instincts kick in when emergencies pop up.

That was certainly the case with two recent, separate incidents on campus, in which officers used Narcan (an opioid overdose reversal medication, also known as Naloxone) to save the lives of two individuals who had overdosed on heroin.

In one case, CSEA members Sgt. Carl Jenkins and Officer Harry Vializ responded to a recent student overdose. They were backed up by officers Rob Freeman and Christian Cea.

“We received a call of someone unresponsive on the first floor of the men’s bathroom in the [campus]field house,” said Vializ. “We noticed that the person was under duress, having difficulty breathing and holding some needles in his hand. With the help of the other officers, I administered two doses of Narcan. He came out of it and he was taken to the hospital.”

For Jenkins and Vializ, this was their first time responding to an overdose since officers began carrying Narcan. The medication is available in a nasal spray, which officers can easily carry with them.

“If you don’t have it on you, it can take a few minutes to get back to your vehicle to get it,” said Clarke Osborn, director of public safety at Rockland Community College. “With an opioid overdose, those minutes can mean the difference between life and death.”

Earlier in the year, another CSEA-represented public safety officer at the college was notified of an unresponsive person at a campus stop for the county’s bus system. That officer’s training kicked in, too, and he saved that person’s life.

Being well-trained pays off. Among the trainings the officers take include first aid and basic life support, along with CPR and the use of an automated external defibrillator. The addition of Narcan training came as opioid abuse became an epidemic. Having opioids laced with fentanyl has made the epidemic even more dangerous.

Some communities have offered civilians Narcan training, something that can make a difference considering it’s not uncommon for overdoses to occur in public facilities.

Jenkins noted that, unlike an EpiPen used for suspected allergic reactions, use of Narcan will not impact a person if they’re actually suffering from something else.

“It only works if you’ve overdosed on opioids,” said Jenkins. “If you think someone has overdosed and you have access to Narcan, use it.” 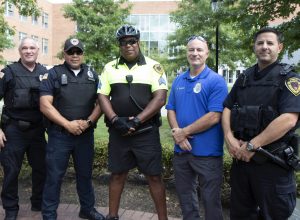 And while Narcan has an amazing impact in reversing the effects of opioids, Jenkins said emergency responders are called to evaluate the patients and encourage transportation to the local hospital for observation. Once the Narcan begins to wear off, some of the impacts of the opioids can resurface.

The Rockland Community College Board of Trustees was slated to honor the officers involved in both incidents at their Sept. 19 board meeting.

Members note the acknowledgment from college officials is appreciated. Vializ said the satisfaction of saving a life is an award in itself.

“It’s a great feeling when you help someone who needed help at that moment in their life,” said Vializ.