LONG BEACH — As 46 counties in New York state were under a state Department of Environmental Conservation drought watch this summer, CSEA members in the City of Long Beach helped a neighboring community sustain its water supply.

In July, when the nearby Town of Hempstead was in need of more water to continue providing water, CSEA members employed at the City of Long Beach Water Distribution District routed 12 million gallons of water to the town through underground water pipes.

The huge undertaking was made even more difficult because Long Beach water distribution district workers were already cutting back on the city’s water supply and running solely on a water storage tank to manage a project at the water facility. Workers also had to contend with city residents’ increased water usage.

Meanwhile, water distribution district workers were trying to fulfill the U.S. Environmental Protection Agency’s request to conserve water by reducing the amount of water the city pumps by almost 5%.

“We made adjustments to monitor water pressure and filter washes, along with other environmentally beneficial changes, so we can get the proper amount of water both areas needed in less time,” said City of Long Beach Chief Plant Operator Charles Bernowich.

Schedule changes were also required to fulfill such a big request.

“We had to have more people working to cover the overtime that was needed to get the work done,” said City of Long Beach Senior Plant Operator Mike Flammer. “We had to ask members working in the water distribution plant to be on call in the event that we needed water valves to be opened or closed.” 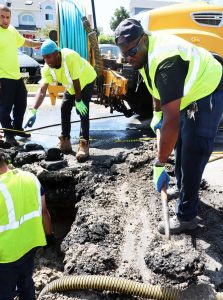 Opening the city’s emergency water valves is not as simple as turning on a water faucet. The water valves, which were put in place for emergencies like a drought, needed to be tested because they hadn’t been opened in years. Then, they had to be closed again and reopened for use. Opening the emergency valves must be approved by the state Department of Health and officially requested by the municipality that needs the supply.

Due to previously scheduled projects, the valves then had to be temporarily closed again, while the project at the City of Long Beach Water Distribution District was completed.

“We were playing with very tight margins in terms of how much water we could produce for the Town of Hempstead and when we could turn on the valves for [the town],” said Flammer.

Some CSEA members employed at the city water distribution district worked late in the day and even overnight to produce water for the town.

“We’re using a lot more of our resources to turn things over quicker, which is why we needed more people on call in case there’s a problem,” said Flammer.

The precision of CSEA members’ work is why no one in the City of Long Beach or the Town of Hempstead experienced any interruption in their water service.

Workers met the tight deadlines despite being understaffed and waiting for new workers to be hired.

CSEA members working at the Town of Hempstead also played a huge role in the success of the water transfer. Workers from both municipalities were in constant communication to make sure the transfer went smoothly.

“They told us that they would supply us with any materials that we needed to complete the job successfully,” said Flammer. “We were really lucky that we work well together.” 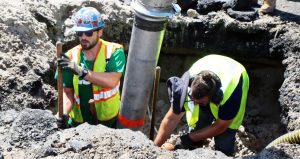