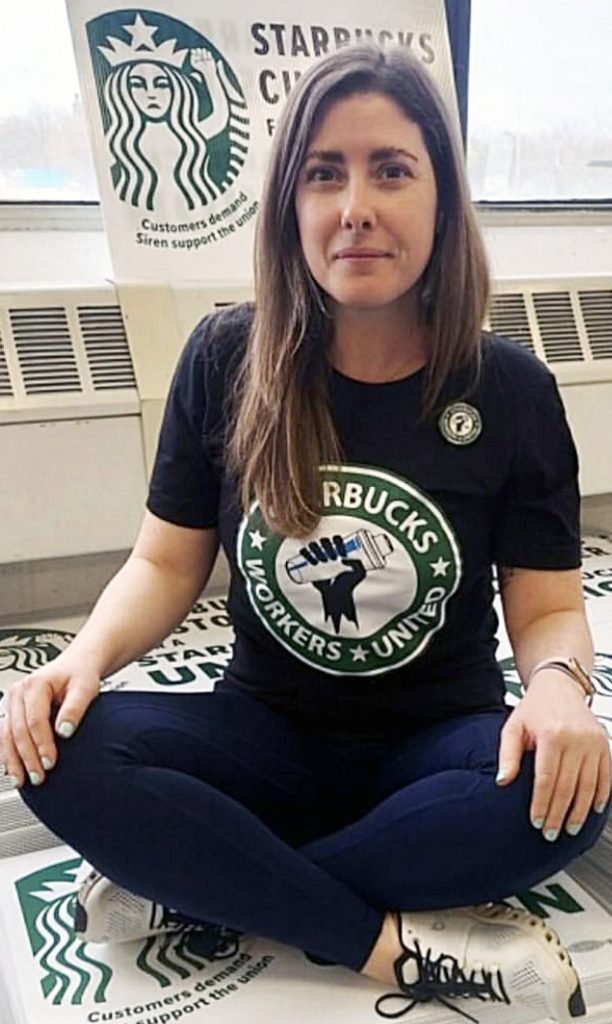 Michelle Eisen, a Starbucks barista and a lead organizer of Starbucks Workers United.

BUFFALO — In August 2021, Michelle Eisen, a veteran barista at the Starbucks on Elmwood Avenue in Buffalo, was asked by one of her co-workers to grab coffee.

“[That] is obviously weird because we serve coffee all day,” she said.

Eisen agreed to meet with the co-worker and wondered whether they wanted advice on how to move up in the ranks within the store.

However, the conversation took a very different turn when the co-worker approached Eisen about unionizing Starbucks.

Eisen admitted that unionizing was not really something that ever crossed her mind, but she grew up in a union household. Both her father, Dwight Eisen, and grandfather, Frank Farmer, were CSEA members at the University at Buffalo.

“I don’t know a ton about organized labor, [but]my grandfather and my father were in CSEA and I knew we had good benefits from it,” said Eisen.

Truthfully, Eisen was gearing up to end her Starbucks career, hoping to leave after the vesting of her company stock shares that are given to each employee.

Plans soon changed when she realized just how much of a difference she could make by helping to lead organizing efforts at a company to which she’s devoted more than 10 years of her life.

“If the option is to stay with the company that I’ve spent over a decade with, in a community that I really love and fight to make it better, then I’d much rather do that than leave,” said Eisen.

One of the driving factors behind the movement to organize Starbucks was the dichotomy of record sales for the company and a stagnant and lackluster wage for its employees. Meanwhile, the company’s CEO received a significant raise in 2021.

“I’ve got co-workers who are working full time and can’t afford to pay their rent and put groceries in their fridge and we’ve got a CEO who’s going to the Board of Directors asking for a bonus based on the profits that the company had brought in,” said Eisen.

Eisen was brought into the organizing process on Aug. 17, 2021, days before the campaign went public.

On Aug. 30, 2021, workers at Eisen’s Starbucks store, as well as workers at two nearby Buffalo locations, filed union election petitions with the National Labor Relations Board (NLRB). The stores were the first in the country to form a union.

Efforts to form a union were stalled when Starbucks contested the ability to unionize individual stores. After nearly a month of a pre-election hearing, the NLRB ruled in favor of the organizers and they were one step closer to unionization. 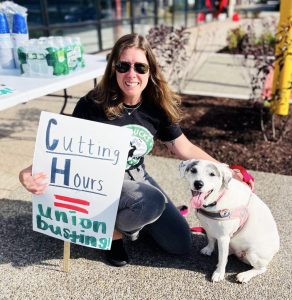 Michelle Eisen, a Starbucks barista and lead organizer of Starbucks Workers United, and her dog Prim fight for a union outside a Buffalo Starbucks location.

A year after that initial conversation between Eisen and her co-worker, there were more than 20 organized Starbucks stores in New York and more than 200 nationwide, as this edition went to press.

While many unions continue their advocacy for workers’ rights, the nationwide surge in the labor movement has been driven by the efforts of grassroots organizations like Starbucks Workers United. Their self-advocacy has inspired several other unionization efforts at companies like Amazon, Chipotle and Trader Joe’s. Some see the structure of these new organizations as an alternative to large unions.

While it’s true that some larger unions employ universal contracts and can be more staff-driven, CSEA is a unique union in that it combines both of these structures. CSEA members benefit from the strength of a large, powerful union with a member-led structure and individualized contracts. In fact, CSEA members have individual contracts that are personalized for different workplaces.

This is why workers from every sector continue to become CSEA members, whether it’s by taking an established union job or organizing their workplace to join CSEA.

“You’re finally seeing workers acknowledging how much their labor is worth,” said Eisen.