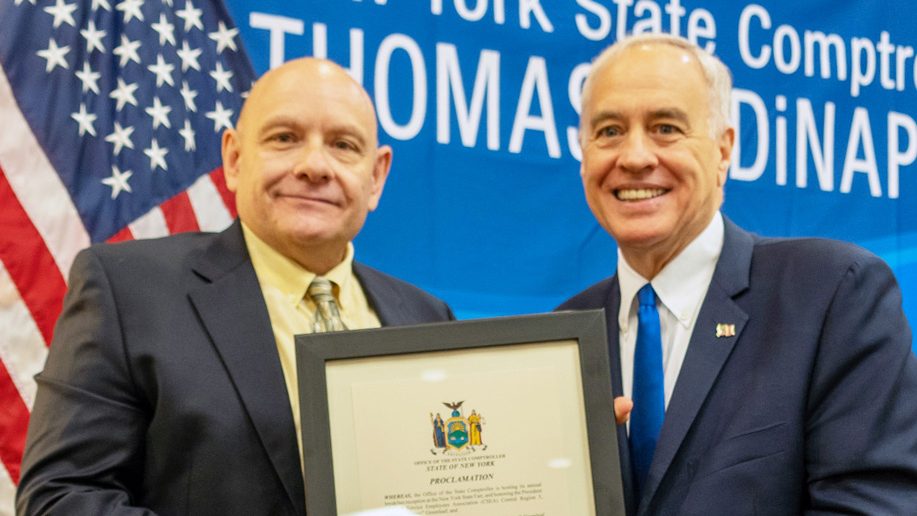 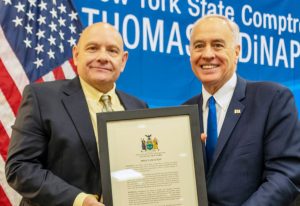 SYRACUSE — CSEA Central Region President Kenny Greenleaf was recognized for his accomplishments in the community and the labor movement by State Comptroller Thomas DiNapoli at the annual Comptroller’s Breakfast at the New York State Fair in August.

With this year’s theme of public service, and a focus on those that are seen by their peers as role models, Greenleaf was one of four Central New York honorees.

DiNapoli, who is the sole trustee of the state pension fund and a longtime friend to CSEA, presented Greenleaf with the award.

“I always look forward to partnering with labor,” DiNapoli said. “It’s labor who really showed up for us during COVID. With labor, we [as a society]are able to make progress.”

Greenleaf has been a proud union member for nearly 40 years while working in the custodial staff at the Hannibal Central School District. He served as unit president for 20 years before becoming Central Region President in 2018.

“I am humbled and honored, but I share this award with many great leaders,” Greenleaf said.

“Above all, I want to thank my family and my parents for their guidance and inspiration,”said Greenleaf. “Both helped to instill in me to always reach out to help someone in need, to do what is kind and what is right, and to always stand on principal and truth.”