LONG BEACH — The CSEA City of Long Beach Unit has union representation on lock, as most of the city’s full-time workforce are members of our union.

Now, thanks to the organizing efforts of the unit’s Executive Board, 47 part-time city workers have now formed a union with CSEA as a new bargaining unit.

It all started when the CSEA City of Long Beach Unit representatives decided to approach the part-time workers at their respective worksites to gauge workers’ interest in joining our union.

Eager to have the power of union representation behind them, most workers did not hesitate to fill out a CSEA membership application.

“It takes 51 percent of the workers to sign membership cards in order to be recognized as a union,” said Mooney. “The gold standard is 70 percent [membership], but here in the City of Long Beach, our standard is 90 percent to 100 percent.”

It was the disparity in the workplace rights between the city’s full-time unionized employees and nonunion part-time employees that propelled the part-time workers to join CSEA.

“Part-time workers have different needs from full-time workers, so it’s important for part-time workers to have their own unit,” said CSEA City of Long Beach Unit Executive Vice President Maureen Fox. “We want to work towards getting them accommodations like leave time so members can still get paid while addressing personal needs like caring for a sick child.”

As CSEA members, the new part-time unit will now have a strong voice to ensure their rights on the job.

The part-time workers are simply looking forward to being in a better position to provide for their families.

“I’m just looking out for what I think is best for my family,” said CSEA City of Long Beach Part-Time Unit Member Jacoby Thomas. “How can I not be happy, knowing that I have a powerful group behind me?”

Thomas is already looking ahead to increasing his union involvement.

“One of these days, I want to be like John [Mooney] and become an activist,” said Thomas.

For his first steps into activism, Thomas has plans to spread the good word about CSEA to present and future colleagues as well as help to sign up more city workers.

Other part-time workers were impressed by the professionalism of the CSEA City of Long Beach Unit officers. 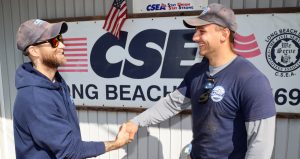 “I had some fear about joining the union, but after speaking with Sean [O’Neill] who signed me up the other day, I said, ‘these guys are really on point,’” said CSEA City of Long Beach Part-Time Unit Member Winsome Parchment. “Then, I met John Mooney and I started to understand that change can happen, just not overnight.”

“Involving the part-time members is part of a larger, long-term push to get city workers to become CSEA members and become activists,” said O’Neill. “If people have time to study how you work and see the ways that you fight for the labor, they’re more likely to sign up when given the chance.”

The nationwide uptick in union organizing also inspired the City of Long Beach Unit Executive Board to grow CSEA’s numbers.

“With so much organizing going on right now, it’s up to CSEA to step our game up, too,” said Mooney. “People have to get active and try to organize the part-timers in their units and then help officers in different unit organize their workforce.”

That is exactly what Mooney is doing. He recently reached out to workers in several neighboring communities to assist in their organizing efforts.

When all is said and done, the power of union organizing lies in the heart.

“You have to care about members,” said O’Neill. “Being on the union board doesn’t mean that you’re there for power and authority; you have to provide. We’re trying to grow CSEA because we want people to believe they can have what we have here in Long Beach.”