Trending
You are at:Home»Awards»Maroney recognized as a ‘GEM’ for service

In this 2022 file photo, Andrew Maroney participates in a St. Patrick’s Day Parade in Binghamton as part of the CSEA delegation.
Awards

Maroney recognized as a ‘GEM’ for service

By Nicholas Newcomb on October 31, 2022 0 Comments
In this 2022 file photo, Andrew Maroney participates in a St. Patrick’s Day Parade in Binghamton as part of the CSEA delegation.

BINGHAMTON — Southern Tier State Employees Local President Andrew Maroney was recognized earlier this year by the New York State Department of Transportation (DOT) with the ‘Going the Extra Mile’ (GEM) Award for taking on the job of acting Highway Maintenance Supervisor and helping the short-staffed crew get through another snow and ice season.

Maroney said that last winter had the most significant understaffing he’s seen in his 12 years with DOT. In December 2021, he was approached by his supervisors to take on an acting supervisor’s role at a moment’s notice.

“It was a great opportunity that I was happy to be able to take advantage of,” said Maroney. “I had the support of all my co-workers, my family and management.”

Maroney immediately switched from a day shift to a night shift and was given more responsibility in his new acting role.

“My arms did get tired from juggling everything,” said Maroney. “Sometimes, you’re at work 20 to 30 hours and then when you come home, the kids are asking you to go build a snowman. My family was so supportive.”

After successfully serving in his acting supervisor role for six months, Maroney resumed his normal job duties in June. Shortly afterwards, he was recognized with the GEM award.

“When management came to me that they were giving me this award, it bothered me a bit because I’m not fond of individual accomplishments. It’s more of a team award,” said Maroney. “While I was kind of at the helm, I couldn’t have done it without [my co-workers]and my family.”

Maroney jested that he’s normally a thorn in management’s side because of his union responsibilities, but he was happy that could be put aside. 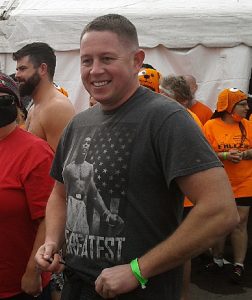 In this 2021 file photo, Andrew Maroney participates in a Polar Plunge.

“It was good to see the hard work paid off,” Maroney said. “It was a team effort, group effort and a family effort. But to get it, that was a big accomplishment.”

Maroney hopes that his honor will inspire other workers to not be afraid to step up to the challenge like he did.

“Hopefully, it opens the doors for people to work harder and others want to do the same thing and go above and beyond,” said Maroney.