Matt Kurimsky, a firearms examiner at the Onondaga County Forensics Laboratory, looks through a microscope to identify markings on recovered ammunition.
Central Region

By Nicholas Newcomb on October 31, 2022 0 Comments
Matt Kurimsky, a firearms examiner at the Onondaga County Forensics Laboratory, looks through a microscope to identify markings on recovered ammunition. 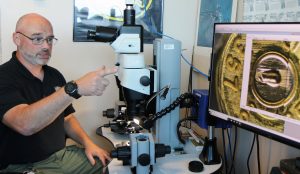 Matt Kurimsky, a firearms examiner at the Onondaga County Forensics Laboratory, looks through a microscope to identify markings on recovered ammunition.

SYRACUSE — Firearm examiners at the Onondaga County Forensics Laboratory are among those on the front lines fighting against increasing gun violence across the country.

Through their testing and analysis of recovered firearms and ammunition from crime scenes, examiners can find evidence that proves critical in making sure criminals are held accountable for their actions and prosecuted. Conversely, they may also find evidence that exonerates a wrongly accused suspect.

One of those examiners at the county’s forensic laboratory is firearms examiner Matt Kurimsky.

A county employee of nearly 20 years, Kurimsky had previously worked for the New York State Police’s forensic program in a CSEA represented position.

His passion for forensics, which was later paired with a degree in biology, began as a student at the University at Albany on a tour of a crime lab.

“The time I went on the tour coincided with a lot of rape cases going unprosecuted,” said Kurimsky. “Because it took so long to get them examined that by the time they were worked up, the statute of limitations had expired and repeat offenders would go on to continue hurting people all because there wasn’t anyone to work the cases. During that time, there was also a presidential initiative to expand the crime labs to allow timely processing of evidence.”

As a competitive shooter since childhood, a hunter, and experience as an armorer maintaining and repairing firearms, the job of forensic firearms examiner was a natural combination of Kurimsky’s interests. 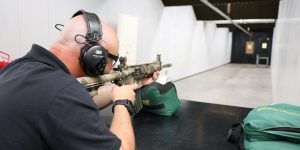 Firearms testing in the lab

At the forensic laboratory, examiners are able to perform a number of different operability and identification tests on recovered firearms and ammunition.

Examiners will test to see if a recovered firearm is working properly and the way the manufacturer intended it to. For example, weapons that have been converted from semi-automatic to fully automatic or altered to make them illegal to own.

“We also perform forensic firearm identification, which is the process where we can take two cartridge cases and determine if they were fired from the same weapon,” said Kurimsky. “This can help us tell in a crime scene how many firearms were fired and which firearms fired what recovered ammunition.”

When a criminal looks to acquire a firearm, they will often obliterate the serial number to try to make it more difficult for law enforcement to identify the weapon’s origin, but examiners at the lab are able to restore those numbers.

“This allows us to help law enforcement agencies identify the source of where these firearms are getting to criminals,” said Kurimsky.

He added that even the way those serial numbers are being obliterated can show examiners and law enforcement a pattern.

Kurimsky said this sort of work can only be performed by qualified and trained firearm examiners, noting that there hasn’t been a computer program that can pick up on the subtleties that a trained professional looks for.

In recent years, incidents of gun violence across the country have spiked. Due to the greater number of incidents, there has been a tremendous strain on examiners and their caseloads. However, the work they perform is valuable to local communities suffering from gun violence.

“I find it satisfying that I’m able to play a role to get criminals committing crimes with firearms off the streets,” said Kurimsky. “At the same time, I’m also able to exonerate through forensic evidence. We can help, in some cases, with closure for families, and we take that obligation seriously.”

“I’m glad we have a union,” said Kurimsky. “I think having a union provides us protection and stability with our positions. Tamara does an outstanding job looking out for the folks who work here.”