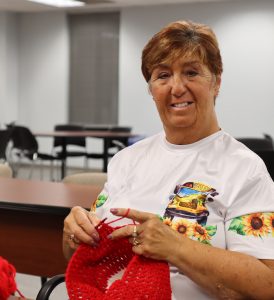 Patricia Reitz crochets a Santa hat at a monthly
membership meeting in November.

CLARENCE — When children board CSEA activist Patricia Reitz’ school bus every day, they greet her with big smiles.

As a school bus driver at the Clarence Central School District and a 29-year CSEA member, everyone in her community knows Reitz. The children’s parents give Reitz holiday gifts every year, and Reitz makes sure she reciprocates that same love and gratitude toward her students and families.

She is doing this through crocheting Santa Claus hats for the students.

In 2005, Reitz took up crocheting simply because she wanted to know how to do it. After showing off her first creation, a black and orange hat, one of her students wanted a hat of his own.

“He said ‘that would go awesome to go down the slopes,’” said Reitz. “So, I made him a hat over the weekend, and all of a sudden I started crocheting more often.”

Reitz then started taking orders for hats to make for her students, which she did for a while until it evolved into Santa hats for everyone.

From kindergarteners all the way up to fifth grade students, all of the students received a hat to wear during the holiday season.

While Reitz only makes hats for students through fifth grade, they have a major impact on older children who had received hats in the past. Many middle and high school students tell her they still have their hats from when they were younger.

Even though Reitz gives the hats leading up to the holidays, she said creating them is a year-round project for her, although she can complete one in about one hour.

“I can do a couple per day,” said Reitz about how quickly she makes the hats.

It’s not every day you meet a bus driver as dedicated to her students as Reitz is. Driving the bus isn’t just a job for her – it’s her career and her life.

She is central to daily lives of so many students and families and every year that she crochets new hats she continues to build her legacy in Clarence.