CSEA Great Neck School District Buildings and Grounds Unit President Carlos Vizcarrondo, shown here on the job, is proud that the creation of the buildings and grounds unit is responsible for the increase in workers’ rights on the job.
Long Island Region

By Wendi Bowie on January 3, 2023 0 Comments
CSEA Great Neck School District Buildings and Grounds Unit President Carlos Vizcarrondo, shown here on the job, is proud that the creation of the buildings and grounds unit is responsible for the increase in workers’ rights on the job.

GREAT NECK — Now that they have their first union contract, CSEA Great Neck School District Buildings and Grounds Unit members have respect and fairness on the job.

Negotiations for the first contract were slowed because of the COVID-19 pandemic. Despite the delay, workers stuck with CSEA through the unprecedented time and now they are reaping the rewards.

The workers decided to form a union with CSEA when they noticed that the workplace culture of the one of the district’s elementary school was becoming more negative. After some administrators had retired, new managers who were less friendly toward workers took their place. 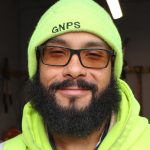 “There was a time when workers knew that whatever raise the supervisors got, we would also get,” said Carlos Vizcarrondo, Great Neck School District Buildings and Grounds Unit President and negotiating team member. “Then, newer administrators came in and they started hiring lawyers. At that point, we knew we had to do something to protect ourselves because we aren’t familiar with legal jargon.”

A union contract not only gives members a seat at the bargaining table, but is often the only thing that prevents workers from being subjected to mistreatment by their employers.

One such benefit of CSEA membership is an in-house Legal Department that fights for members. Before joining CSEA, Great Neck buildings and grounds workers would stop meetings with their managers to research legal terminology on their own. Now, workers have access to our union’s legal and labor relations staff who help members better advocate for their workplace rights.

The CSEA Great Neck School District Building and Grounds Unit’s new contract also brought pay raises and protection from unnecessary professional responsibility changes that would not be beneficial to members.

“We learned how to negotiate,” said Vizcarrondo. “We learned that you have to be willing to give to get, and that there’s certain changes that we can’t stop because those rules extend beyond the parameter of our contract.”

Another CSEA resource is access to training to build knowledge and skills.

Vizcarrondo has taken several trainings offered by the CSEA Education and Training Department, which have helped to improve his negotiating skills.

“CSEA offers a lot of tools that we didn’t have before we organized,” said Vizcarrondo.

Workers at the elementary school have experienced a whole new level of respect since they’ve become CSEA members.

“We don’t get picked on like we used to,” said Vizcarrondo. “You can see that management is thinking twice before they say anything to us.”

One of the big lessons that CSEA Great Neck School District Buildings and Grounds Unit members learned through the negotiations process is to be patient. Rushing through the process reduces one’s opportunity to deeply consider choices, which increases the chances of making less informed decision.

Recognizing that not every tactic works for every person, Vizcarrondo was careful to speak with unit members about their thoughts on negotiating points.

“Negotiating team members wanted to make sure that all of the workers were on the same page,” said Vizcarrondo.

The unit’s first contract also had another impact with other district workers After seeing the strength the buildings and grounds workers attained after organizing, other workers in various job titles across the district are also forming unions.

“It feels good to know that other workers are inspired by what we’ve accomplished and are taking the same steps to protect themselves,” said Vizcarrondo.