MANHATTAN — Known for being the city that never sleeps, CSEA’s Metropolitan Region is also proud to boast of our members who never quit and stay union, stay strong.

That sentiment and spirit was felt throughout the region during an abbreviated, yet intensive, member engagement visit to several worksites.

More importantly, it gave members and activists who work for the same agencies in different parts of the state an opportunity to interact and build relationships. 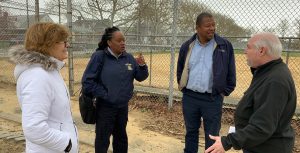 State Department of Motor Vehicles Local President Cindy Stiles, who also chairs our statewide CSEA/DMV Labor Management Committee, came down from the Capital Region to lend a hand and discuss many workplace concerns that our members across the state share, including per diem challenges issues and safety and health issues.

“I love to remind our members that they have a union family throughout the state fighting alongside them,” said Stiles, who visited several DMV sites throughout the city.

Our members who work in the courts were a priority during these visits since it’s a department that historically hasn’t allowed for the same level of union interaction as other state agencies.

“As a courts worker myself, I know it hasn’t been easy to gain access to our members and get them more involved,” said Martusciello. “These meetings are laying the groundwork for more activism from these dynamic and conscientious members.”

Meetings were also held at the New York State Veterans Home, state Department of Corrections, Department of Environmental Conservation, Department of Transportation, Office of Mental Health, and the Guild for Exceptional Children.

In addition to Stiles, volunteers from other parts of the state were accompanied to many of these meetings by a cadre of Metropolitan Region officers and activists, including Region President Lester Crockett, New York City State Employees Local activist Marie Rogers, State Insurance Fund Local President Delphine Moultrie, and Metropolitan Region Treasurer Jamel Harewood.

“I’m incredibly proud of the team effort that went into these meetings,” said Crockett. “I sense a new crop of activists in the very near future because of the seeds we all planted.”