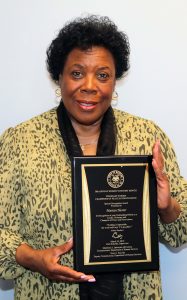 Marian Hester poses with the plaque she received at the Visionary Women awards ceremony.

COMMACK — CSEA Suffolk Retirees Local 920 activist Marian Hester vigorously participates in both union and community activities because she truly cares about the welfare of others.

It is for this reason that Hester was recently honored with the Visionary Women: Champions of Peace and Nonviolence Award at the Town of Babylon Supervisor and The Department of Human Services’ 30th Annual Women’s History Month celebration.

Every year, the award is presented to 30 women who exemplify the theme for that year’s ceremony. This year, the theme was peace and nonviolence.

“I was so happy to be there,” said Hester. “I got to meet so many people from different professions and walks of life that shared my same passion for integration and non-segregation. I was also very happy that my friends from CSEA came out to support me.”

Being born when the cruel Jim Crow segregation laws were in effect in the South, Hester saw her fair share of racial injustices. In fact, her mother was so worried about the situation that she moved the family to New York in the early 1960s to escape the segregation.

“When I got here [New York], I saw that a lot of things were different, but I also saw that some things were the same,” said Hester. “I decided that I wanted to be a part of making the change and making things better. I wanted to show people that when you become the change that you seek, others will follow.”

She became that change by trying to bring people together at school.

“There was a lot of different races against each other,” said Hester. “I was always trying to stop people from fighting and work toward finding a resolution for their problems.”

Her gift for inspiring togetherness came in very handy for Hester once she transitioned out of school and into the adult world, when Hester began helping out with union activities during her tenure at the Long Island Developmental Disabilities Service Office (LIDDSO).

It was at LIDDSO where Hester chaired the agency’s annual The Rev. Martin Luther King Jr. Program for more 25 years. The annual program is held to honor King’s birthday and legacy.

While never holding an official union office, Hester still played a key role as an activist, serving as information purveyor, a peacemaker and a support system for unit officers.

Post-retirement, Hester is as active as ever. 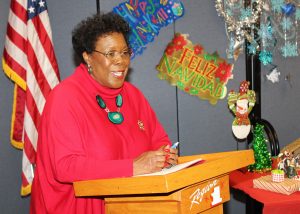 “I really enjoy getting beneficial information out to the members,” said Hester. “It’s difficult for a lot of the retirees to get out of the house; I enjoy picking them up and bringing them to meetings.”

Hester also keeps herself busy outside of her CSEA activities by volunteering at her church and her local AARP chapter, along with a host of additional community programs and committees.

Even with her busy schedule, Hester admits that she never gets tired.
“I believe with God’s help, you can get anything done,” said Hester. “At the end of a long day, I feel like I have done what the Lord wanted me to do for that day.”

Hester feels that it is important for retirees to get — and stay — involved because our union always needs people to help.

“It’s really important to stay busy and help someone else,” said Hester. “We also have to stay involved [in our union], so we stay aware of the issues that affect us as retirees.”

Hester feels that it has been helpful to have the support of union leaders along the way.
“It’s encouraging to have leaders like Nick LaMorte [CSEA’s Long Island Region President] to encourage you to bless others with what you’ve been blessed with,” she said.