Trending
You are at:Home»CSEA fought and won»Union fights for worker justice

WESTBURY — Our Nassau County Local is fighting to protect seasonal employees at the Eisenhower Park Golf Course after local officers learned of the discrimination, degradation and unsafe working conditions faced by the mostly Latino workers.

Nassau County officials had been using seasonal workers at the golf course as year-round employees in an effort to avoid paying for benefits.

Systemic discrimination
In addition to being denied health benefits they had earned, the seasonal employees’ work environment included supervisors who not only practiced, but encouraged, discrimination toward the workers.

On one occasion, the workers approached park supervisors to question why no Latino workers had a
full-time position. The supervisor had apparently responded in a snide tone, “No Hispanic person will ever get a full-time position here.”

Not to be deterred, the workers still filled out applications for full-time employment, only to have management mockingly laugh at the workers as they told the seasonal employees that all of their applications were missing.

To make matters worse, the seasonal workers said that management would instruct them to shovel snow in frigid weather temperatures, without appropriate protective equipment.

Seeking fairness
Appalled by management’s conduct, a few of the workers approached our union in search of justice.
The Nassau County Local immediately began fighting for fairness for the workers.

Because many of the Latino workers primarily speak Spanish and are not fluent in English, local officers recruited Nassau County Community College Unit President Ana O’Gorman, who is bilingual, to be the workers’ translator during meetings with the seasonal employees.

O’Gorman, who also serves as the local’s 4th vice president, played a crucial role in breaking down the language barrier, ensuring the local and the seasonal employees would remain on one accord.

“Our seasonal employees needed to trust someone, and I decided to be that person,” O’Gorman said.
Nassau County Local officers approached county administrators hoping to come to an agreement to make all seasonal employees full-time, but the county has refused to budge.

“It’s outright corruption by management, and the county, to keep an employee on as a seasonal worker, all year long,” said Nassau County Local President Jerry Laricchiuta. “Sadly, I’ve noticed that the county is mostly doing this to Latino workers.”

When park supervisors heard that the seasonal employees were having meetings with our union, the workers started receiving threats from management.

Continuing fight
Due to management’s workplace abuses, the local filed a grievance on behalf of the workers.

“Now the county is starting to realize that they don’t have a good standing in this matter, so they have begun to negotiate with our local, which is why they have given us seven new hires,” said Laricchiuta. “I’m not satisfied with just seven full-time hires. We’re going to continue fighting for the seasonal employees until all of them have full-time working status and this issue is resolved.”

To prevent the county from taking advantage of future seasonal employees, Laricchiuta has begun crafting a rule that addresses these issues.

Our seven new full-time employees are thankful to have our union’s support. 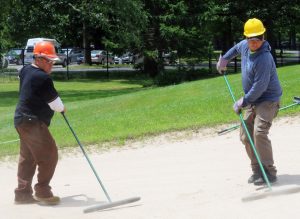 “Without CSEA, we wouldn’t have the respect that we have today,” said Laborer Jose Fabian Vela. “Now, we have health insurance and other things to be proud of.”

The ongoing fight for justice has further developed the seasonal employees’ sense of camaraderie and solidarity.

But our union is just getting started taking Nassau County to task for the mistreatment of the seasonal employees at the Eisenhower Park golf course.

“We’re going to beat them [management]down, like we always do, because the way they’re treating seasonal workers is wrong,” said Laricchiuta. “We’re not going to stop fighting until we get the Latino seasonal workers all of the rights, and all of the money, that they’ve been denied by Nassau County.”