A look at Danny’s Service 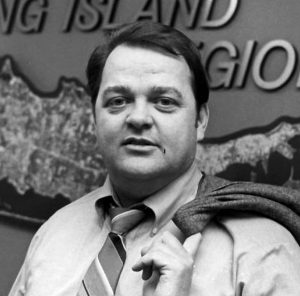 Donohue as Long Island Region President in the 1980s.

Publisher’s Note: In our union’s 109-year history, we’ve never had a longer-serving leader at the helm than Danny Donohue, let alone one who modestly describes himself as “just a truck driver from Brooklyn.”
Recently, Donohue retired from his 7th term of office, saying it was time to allow new leadership to rise up in our union.

As his historic presidency comes to a close, we’re taking this opportunity to highlight his more than 40-year career of activism, advocacy and passion for serving our members. We hope you enjoy this overview of his decades of service, mostly told through photos, and on behalf of our entire grateful union family of members, officers and staff, we offer a hearty “Thank you, Danny” and best wishes in your retirement!

ALBANY — As CSEA’s 23rd President, Danny Donohue led our union for more than 25 years, along the way becoming one of the most influential and well-respected leaders in the American labor movement.
Born in Brooklyn, Donohue began his career in public service in 1965 as an attendant at Central Islip Psychiatric Center. He burst into CSEA’s leadership ranks in 1975 when he won a write-in campaign to become local president there. During that time, Donohue also became active on our union’s region and statewide levels, eventually becoming the region’s 1st Vice President.

When Long Island Region President Irving Flaumenbaum passed away in August 1980, Donohue ascended to the region presidency. He later won re-election unopposed and would serve as region president until 1988, when he won a five-way race to become CSEA’s Executive Vice President.

In 1994, Donohue was elected as statewide President after President Joe McDermott retired. Donohue, the first Long Islander to be elected as our union’s statewide president, would go on to lead CSEA for seven terms.

Known for his down-to-earth personality, Donohue connected with our members across the state. He led the way in our union’s efforts to stay strong through contract negotiations, political action and organizing, and never forgot our members who repeatedly voted him into office.

The Donohue era has been marked by advancing the right to healthy, safe workplaces.

Our union also played a key role in helping to secure safe patient handling legislation that will protect workers and patients from injuries related to lifting and moving. Other safety and health accomplishments include helping lead the way for safety for those who work on or near roadways and helping ensure that workers have the training and protective equipment necessary for their jobs.

Donohue’s leadership on the New York state AFL-CIO’s Pension Task Force produced the most sweeping pension improvements in a generation for public employees, securing permanent cost-of-living allowances (COLAs) for retired public employees and other reforms, when enacted in 2000. Throughout his tenure, Donohue led the fight to ensure continued secure pensions and other retirement benefits.

Under Donohue’s leadership, CSEA also led the way to unprecedented union organizing in the public and private sectors, especially when CSEA became the representative for more than 25,000 independent child care providers across the state, under a new model of union representation.

Donohue also significantly strengthened the union’s role and influence in both AFSCME and the AFL-CIO. As union members across the country faced challenges to their rights, Donohue led CSEA’s efforts to stand strong with our brothers and sisters in labor.

Donohue also helped set the stage to keep our union strong in the future, including leading our union’s Next Wave initiative to mentor newer activists. He was proud to hold regular meetings to hear concerns from members in each of our six regions at least once a year across the state.

As challenges from anti-groups mounted in recent years, Donohue also helped spearhead our continuing efforts to reach out to and engage all of our members at their homes and workplaces. These efforts have helped keep our union strong.