Trending
You are at:Home»Awards»Page: Unionism runs in the family

Page marches in the 2019 Labor Day Parade at the New York State Fair in Syracuse.
Awards

Page: Unionism runs in the family

By Nicholas Newcomb on December 20, 2019 0 Comments
Page marches in the 2019 Labor Day Parade at the New York State Fair in Syracuse. 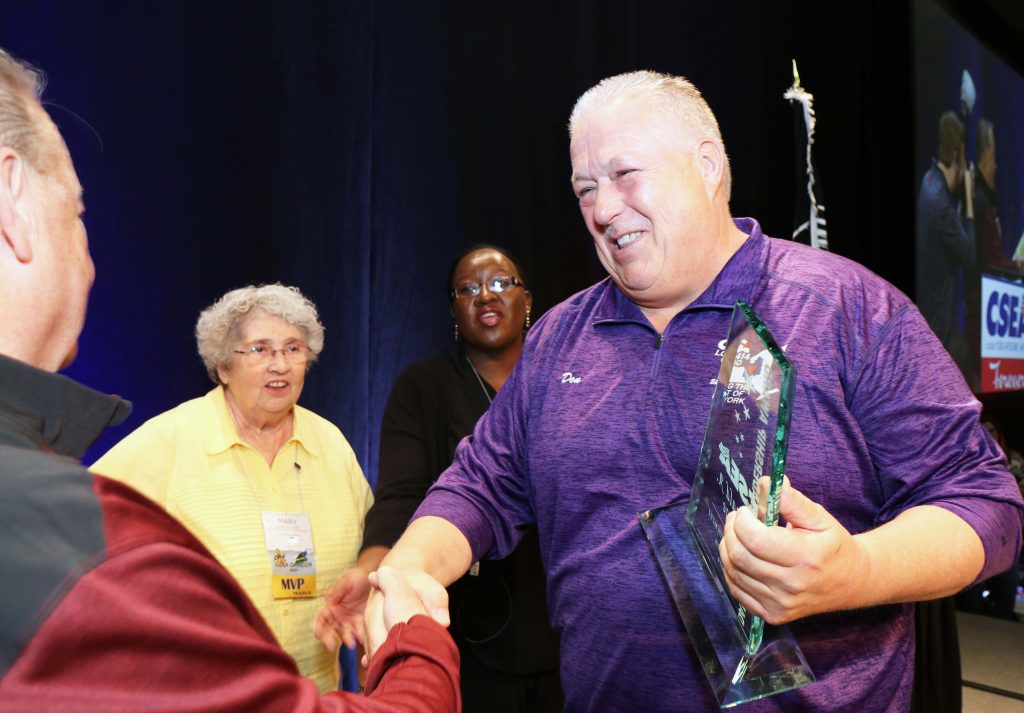 ROME — The recipient of our union’s first Danny Donohue Leadership Award for the State Division actually wishes his name wasn’t on the award at all.

Page considers himself a people person, a good listener and has been a tireless advocate for CSEA members. He gives as much of his time as possible to our union, whether it’s volunteering for member engagement blitzes or taking on very difficult issues on behalf of his members.
His union activism is something he not only takes pride in, but it runs in his family.

A union family
Unions and the Page family go hand-in-hand, with a total of more than 160 years of CSEA service in Page’s family. His dad, Bill, and his late mother, Sally, both worked for the state and instilled the values of unionism in Page and his late older brother David Page, also a CSEA activist who was commonly known as ‘Bear.’

“I remember, as a kid eating at the table, my mom and dad talking about union issues,” Page said. “Because of the union, even though we came from the south side of the railroad tracks in Rome, our family did a little better than people whose parents didn’t have a union.”

Early in his professional career, Page worked at Rome Cable. In almost 10 years working there, he was a part of two union strikes and ultimately lost his job when the business closed down.

He now sees it as a blessing in disguise because that’s when he started working for the state.

Shortly after Page was hired, Bear also got a job with the Central New York DDSO.

“Next thing I know, he’s running for president of the local,” Page said.

At that point, Page had no choice — in a good way — but to take on a leadership role with his brother in charge. Things were looking good as Page recalled Bear did a lot of “cleaning up” and laying groundwork for the future.

Unfortunately, Bear was taken too soon in 2010 when he died from injuries sustained in a motorcycle accident driving to a union meeting.

Stepping up
In 2013, Page rose to the rank of local president, following in his brother’s footsteps.
But it wasn’t easy when Page took office. The Justice Center had just gotten off the ground and no one knew the impact it would have on workers. Page noted that while dealing with the Justice Center was initially very challenging, now there is a mutual respect between the center’s investigators and the local, something Page considers an important achievement.

Young recalled that during a visit to a member’s home, the member indicated he and some friends were considering quitting our union.

Page spoke with the man for 10 minutes. After that conversation, Young sald the member not only recommitted to our union but is considering becoming a steward.

Like many units and locals, it was initially a challenge for Central New York DDSO to get local members involved in our union, but the local has grown in strength. The local has a strong Next Wave base and often recruits people to its committees at holiday parties and other functions.

Much of that can be attributed to the culture Page has helped shape.

“He’s really a caring person. When he took care of the folks, he was a caring giver. Now that he takes care of the employees it’s the same thing,” said Central New York DDSO Local Treasurer Paul Stone. “He’s very empathetic and fair. I think there’s a good base of people that he’s brought in that are going to keep it going and make it stronger.”